Cirque du Soleil’s Alegria 2.0 will make you forget about your troublesome news feed

A gay clown motif, a revamped set design and jaw-dropping acrobatics bring one of Cirque's signature shows into a new era 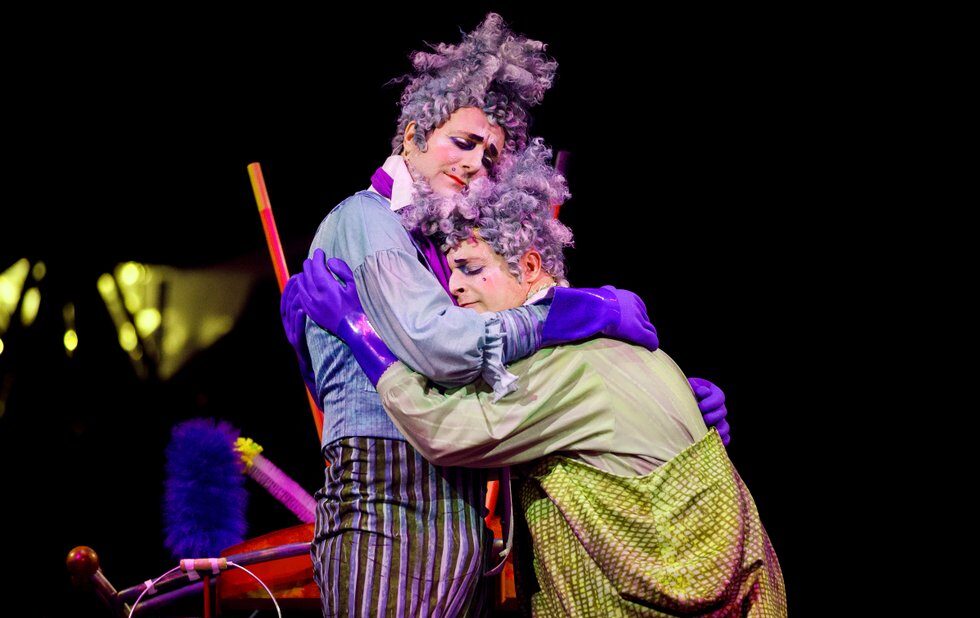 The world might be a dumpster fire right now, but Cirque du Soleil’s Alegría: In A New Light is here to make you forget all that. It seems that now more than ever we need the escape that only jaw-dropping acrobatics and amusing clown turns can deliver. Even its catchy, soaring title tune is reassuring.

Mind you, that tune has been modified and updated for this 25th anniversary production of the iconic show – hence the subtitle. So have the costumes, sets and routines.

For one thing, a couple of gay clowns almost steal the show this time out.

Played by Spain’s Pablo Bermejo Medina (identified as Tall clown) and Pablo Gomis Lopez (Small clown), the duo start off gently bickering, which leads to an old-fashioned duel, which leads to… well, I don’t want to spoil the surprise, but their arc is among the most imaginative and touching in any Cirque show. The clowns are so engaging, in fact, that the first act ends, not with a big, rousing group acrobat number as per usual, but with a stunning visual moment featuring the duo in a wintry scene that’s a nod to Slava’s Snowshow, which of course is indebted to Cirque’s canon.

There’s lots of excitement in the more physical routines, including Jonathan Morin’s cocky, confident crossed-wheel routine – imagine a bare-chested dude whirling around on the stage as if in a NASA astronaut test – and Darina Mishina’s precise, perfect hand-balancing act.

Alexis Trudel and Catherine Audy seem to defy gravity with their balletic and beautiful aerial straps routine, while Elena Lev twirls hoops on seemingly every part of her body with sassy showmanship.

And during intermission you’ll likely be talking about the logistics of Lisiate Tovo’s fire knife dance routine, in which he twirls fiery sharp batons and seems to have no trouble eating, touching and stepping on open flames for cringeworthy lengths of time.

These individual feats work better than the big ensemble numbers. Perhaps it’s just because, under Jean-Guy Legault’s direction, it’s easier to focus your attention on one or two people. In one group routine, the fact that the stage is lowered as the gymnasts bounce off it – rendering the set unviewable for big parts of the audience – detracts from the excitement.

Dominique Lemieux’s costumes are as colourful and richly textured as ever, and the set, complete with what seems like a Game Of Thrones-like motif, has the grandeur required for such a big production.

And of course there’s René Dupéré’s score, belted out by Irene Ruiz’s Singer in White and Virginia Alvez Garcia’s Singer In Black with Euro pop seriousness.

While you’re down at the show, situated next to the Budweiser stage, make sure you enjoy the Toronto skyline. Another sight to make you forget about your news feed for a while.

After a 17-week shutdown, the Royal Ontario Museum is projecting a $18 million revenue hit, opening more outdoor space and.