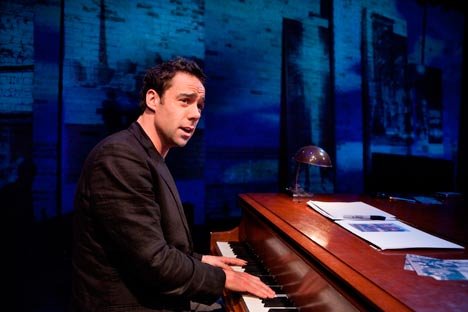 You won’t find better sustenance than Civil Elegies, Mike Ross and Lorenzo Savoini’s theatrical adaptation of poetry by Dennis Lee. An ode to our city as well as a look at our national identity, the work is both charming and thoughtful in its message.

Lee’s award-winning 1967 collection Civil Elegies is the source of the non-musical material. Ross has fashioned tunes for some of the poet’s other verse, using a smooth, appealing song style that ranges from bluesy to bright as a happy carousel melody.

On a bare stage, Ross creates a character uncertain of his present, his emptiness echoed by the vastness of the new City Hall and the spacious plaza around it. Conjuring up historic images and even the country’s geologic history, he revivifies his perception of the world and his Canadian place in it.

An engaging performer, Ross gives the material a strong theatricality, and should win over even those who don’t care much for poetry. While there’s humour and poignancy in Lee’s words, Ross drives those qualities home by creating an Everyman who discovers and learns, as we do, the importance of our surroundings.

Savoini’s contribution, a subtle, magical design of projected images and live video, turns an abstract landscape into a series of red maple leaves, and several almost invisible flats into a metaphoric Toronto cityscape.

Civil Elegies examines loss, but looks – with comfort, warmth and a seeming simplicity that overlays deep concerns – to a renewal of the Canadian spirit.