Acting makes up for dated script 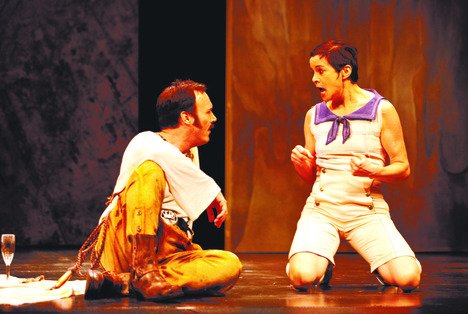 Blair Williams and Ann-Marie MacDonald act up a storm in Cloud 9.

Run to the Panasonic, where some of the city’s best actors, skilfully directed by Alisa Palmer, perform in Cloud 9. A shame that Caryl Churchill’s play is flawed and even a little bit dated.

It begins in 1880 in Africa, where British colonials Clive (David Jansen) and wife Betty (Evan Buliung in drag) live with Betty’s mother, Maud (Yanna McIntosh), and their two children, nascent gay boy Edward (Ann-Marie MacDonald) and Victoria (a cloth doll used to terrific effect), and the nanny Ellen (Megan Follows). They live in mortal fear of the indigenous blacks – except for their black servant, Joshua (Ben Carlson), whom they treat as if he were invisible.

Adults play children, and men play women, all in an effort by the playwright to subvert gender expectations. The cast does wonders with the very broad strokes, especially Follows, MacDonald and Buliung, and with the one-liners that are jokes only to the audience.

Act II takes place 100 years later, when the characters, played by different actors, have aged only 25 years. Edward (now Buliung) has come out and is living with his boyfriend, Gerry (Carlson). Victoria (McIntosh) is unhappily married to Martin (Williams) and attracted to Lin, mother of little Cathy, hilariously played by Jansen.

The feminist thrust of the piece is even stronger in Act II. This is, after all, Churchill’s sex play, and she demonstrates all the possibilities – gay, straight, group, the single life – in an effort to disrupt the heterosexual monogamous model.

But, expressed more naturalistically in the second half, Churchill’s feminism seems almost strident, a word I’d normally never use.

In one scene, Victoria’s prig husband, Martin, is totally eviscerated. He’s an easy target, and the only one so two-dimensionally drawn in the second act, skewing the emotional balance.

A playwright today couldn’t get away with such a cheap shot.

It might have helped if director Palmer had made the 1980 setting more explicit – some disco maybe, or a signifier in the costumes. [rssbreak]