NOW MagazineCultureTheatreThe Story is as magical and entertaining as ever

The Story is as magical and entertaining as ever 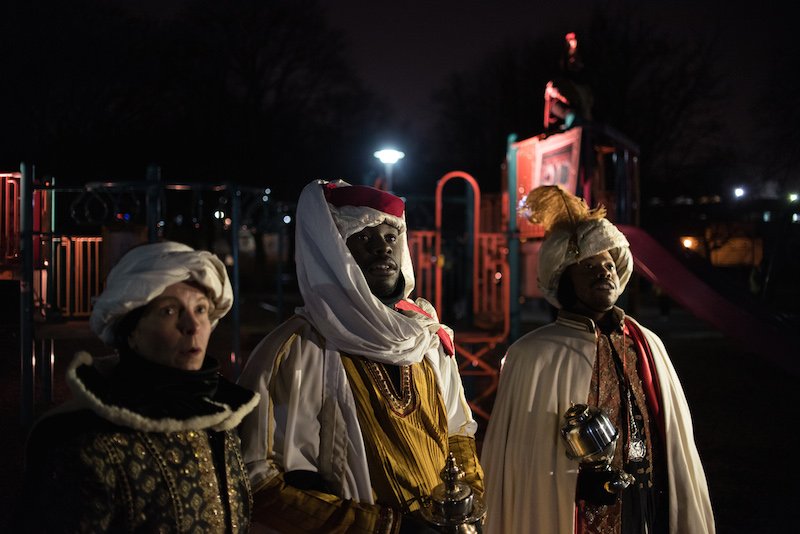 A lighthearted, tongue-in-cheek spin on the traditional birth-of-Jesus story, Martha Ross’s script is full of funny puns and irreverent one-liners that keep you chuckling while you move between the 10 different locations throughout the park where scenes are performed.

At the centre of The Story is Mary (Shakura Dickson) who separates from Joseph (Marcel Stewart) during an authoritarian takeover of their homeland, and heads on a difficult journey alone, eventually ending in Bethlehem.

Christie Pits lacks some of the vintage brick-and-beam charm that buildings at the old location offered, but directors Jennifer Brewin and Katrina Darychuk still find plenty of fun and clever uses for the existing natural and built features of the park.

For instance, Dan Mousseau scores big laughs as the maniacally evil, megaphone-wielding, centurion-styled King Herod while using one of the park’s outdoor slide-and-jungle-gym playsets as his castle, an apt choice highlighting the character’s childishness.

In another scene where he plays a hilariously neurotic angel Gabriel, Mousseau makes an impressive entrance, sledding full speed down one of the park’s steep slopes with wings extended to inform Mary of her divine destiny.

The stunt – dependent on there being snow on the ground, obviously – is an instant crowd-pleaser and nicely incorporates one of the many winter activities the park is known for.

The holiday enchantment is further accentuated by a live choir (we saw the Eastminster Choir) performing traditional carols as the audience is shepherded from one location to the next.

Since this December has been colder and snowier than recent years, it’s worth remembering to check the forecast before heading out to this hour-long show, and to bundle up if necessary – including mittens and boots! Standing watching the action can get chilly (tip: pack a thermos full of hot chocolate, cider or coffee), and the walk between locations can involve traversing some snow-covered and potentially icy areas.

Still as entertaining and magical as ever, The Story is fast becoming a Toronto holiday tradition.