VideoCab's merciless skewering of Canada's past is educational and entertaining, even if you're not a history nerd 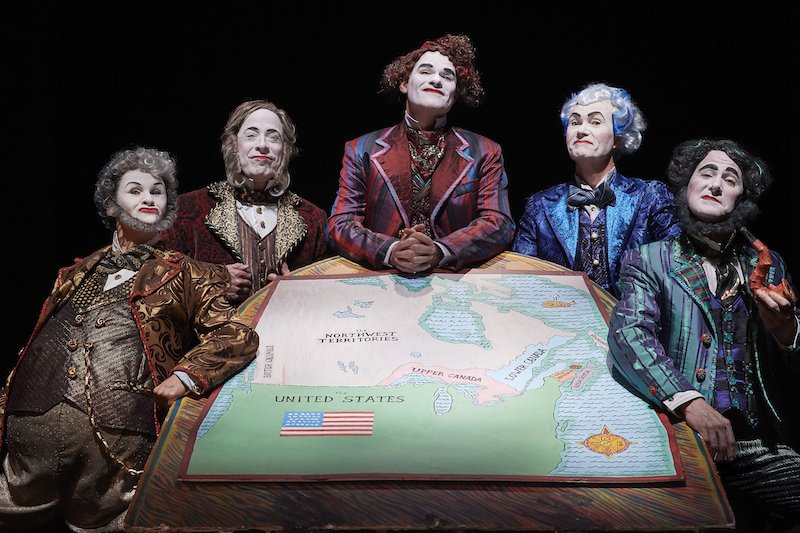 If the earnest and schmaltzy pomp surrounding Canada 150 feels as saccharine as chugging a bottle of maple syrup, VideoCabaret’s comical and critical send-up of Confederation and the first Riel rebellion is the antidote.

As birthday bonus, Confederation And Riel runs in rep with Scandal And Rebellion – opening June 30 – the next entry in Michael Hollingsworth’s epic 21-part series The History Of The Village Of The Small Huts. Its episodes mercilessly skewer Canadian political and cultural history from European colonization to the near-present as visually dazzling, fast-paced, Brechtian comedy-of-manners.

Confederation follows John A. Macdonald’s (Richard Clarkin) whiskey-fuelled backroom wheeling and dealing between Montreal, Charlottetown, Quebec City and Ottawa to align diverse provincial interests with the idea of a unified Canada, while staving off threats of Irish Republican Fenian raids.

Hollingsworth’s sharp and hilarious script expertly distills the major figures  into vibrant caricatures and the constitutional debates – specifically around the style of central government Canada should have and the provinces’ powers within it – into succinct scenes rich in historical detail.

Counterpoint to the Confederation success story is the Catholic education and political radicalization of future Metis rebel leader and “father of Manitoba” Louis Riel (Michaela Washburn), culminating in his first post-Confederation showdown with Macdonald and the newly minted nation. While Clarkin’s increasingly tipsy Macdonald provides the framework for both the show and the nation under construction, it’s Washburn’s Riel, who grows from an idealistic and pious teenager into a freethinking renegade, who’s the most intriguing of the bunch.

As always, co-directors Hollingsworth and Deanne Taylor serve up these complex stories in efficient vignettes accompanied by stunning, highly stylized, cartoon-like visuals (with video elements by Adam Barrett and Brad Harley, and costumes by Astrid Janson and Melanie McNeill) that are haunting, trippy and endlessly amusing all at once.

Educational and entertaining for both the uninitiated and experts alike, VideoCab’s history plays are a national treasure and should be running in rep in Ottawa as a check on this moment of too-rosy reflection and uncritical celebration.