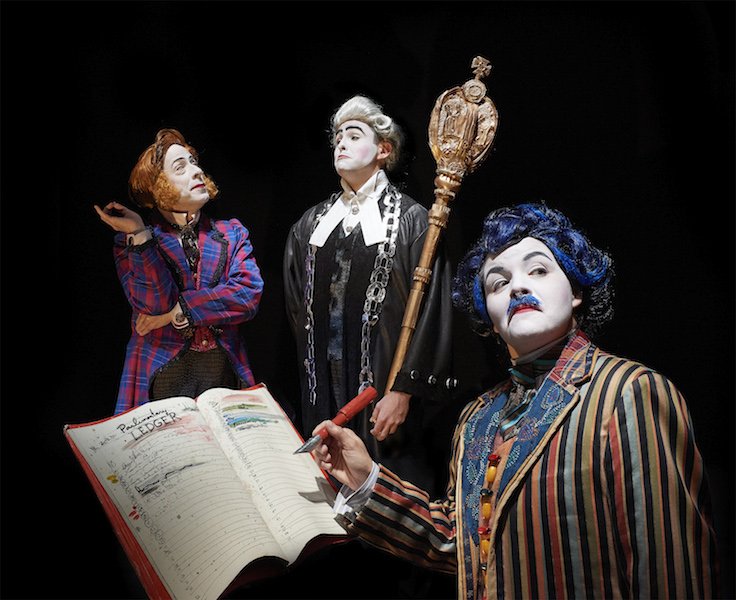 VideoCab are finally realizing their long-held dream of running selections from Michael Hollingsworth’s comic 21-part Canadian history series, The History Of The Village Of The Small Huts, in rep.

They’re starting small, running the two Confederation episodes (selected no doubt to offer a critical counterpoint to the Canada 150 celebrations) on alternating nights, but the result is wonderful and should be continued and scaled-up in the future.

Picking up where Part I: Confederation And Riel, leaves off – with John A. Macdonald’s (Richard Clarkin) successful nation-building, and Metis leader Louis Riel’s (Michaela Washburn) radicalization and first rebellion at Red River – Part II continues the stories of these two disparate yet connected figures.

Macdonald’s leadership is thrown into crisis when his own shady deals to finance the continent-spanning railroad and his Conservative party’s successful re-election bid become public as the infamous Pacific Scandal. Riel, elected to parliament representing Manitoba but denied entry, ends up first in exile, then in an asylum, before returning to the prairies as the political leader of the bloody North-West Rebellion.

In this episode, Clarkin’s commanding Macdonald descends further into whiskey-fueled alcoholism – he’s basically sloshed the whole time – while Washburn’s wide-eyed Riel comes under divine delusions that convince him his destiny is to become the Moses (or Joan of Arc) of the prairies.

Seamless in terms of look-and-feel with Part I, Scandal & Rebellion is presented in the company’s signature black box style with the detail-rich plot progressing through quick and funny Brechtian vignettes accented by vibrant backdrops, detailed props, dazzling costumes and hilarious cartoonlike performances.

Seeing both back-to-back only enhances the potent spell that VideoCab’s enchanted histories cast. Sell the double-bill to your friends as Tim Burton does Confederation.