DECEITFUL ABOVE ALL THINGS by Genevieve Adam (Favour the Brave Collective/Storefront). At Factory Studio (125 Bathurst). Runs to February 26.. 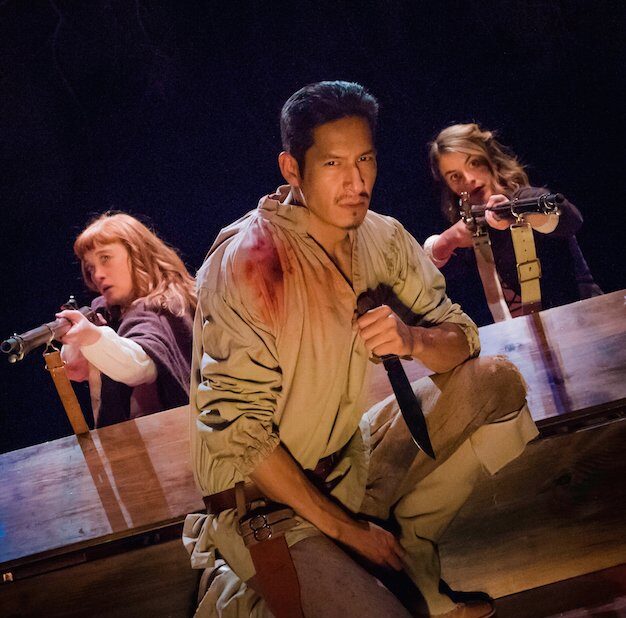 Themes of bravery, romance and sacrifice underpin Genevieve Adams Deceitful Above All Things, an often absorbing look at the late 17th century settlers of New France and the First Nations people they meet.

In the opinion of the prim Mme. Etienne (Madeleine Donohue), the self-declared chaperone of the young women in the community where the women settle, Toussaint isnt the partner that Marguerite, her pride and joy, deserves the older woman looks down on him as a half-breed who isnt part of proper society.

Etienne also has problems with the feisty Anne, who doesnt always show the proper respect to her husband or to Father Francois (John Fitzgerald Jay), a Jesuit who has journeyed across the Atlantic to convert the locals but is equally drawn to giving up his life for his Saviour.

Moving back and forth in time, Adam weaves together their stories including that of Catherine (Joelle Peters), a native woman who has attached herself to the French people with growing richness. Still, some elements could be further developed. We know why Anne travels to a new world, but Marguerites back story isnt as clear, and Amable isnt as fully fleshed out as he might be.

Even so, the actors, directed by Tanya Rintoul, are engaging, especially Adams clever, often entertaining Anne, Donohues snobbish Etienne, and Grace and Smith as a couple who play out an unusual seduction after he saves her from a ravenous bear. The two develop their relationship, at times gentle and nuanced and at others fierce, with an understated but sexy chemistry theyre the most memorable part of the production.

The design is another simple but striking part of the show, notably Nancy Anne Perrins set, which combines a red and white floor blood and snow? with upside down branches suggesting the wilderness locale, Logan Cracknells lighting and Deanna Chois atmospheric sound design, which help underline the shows moving and satisfying final image.