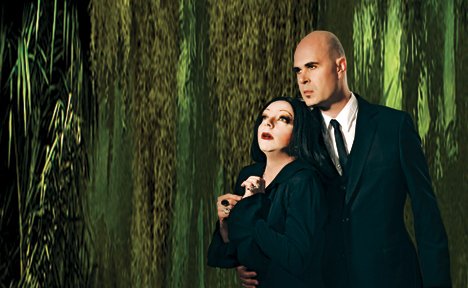 Stephen Lawson (left) and Aaron Pollard are in the Zona.

Stephen Lawson (left) and Aaron Pollard are in the Zona.

Lovers of David Lynch’s filmic puzzles will appreciate the challenge of patching it together. As the frequent sampling of Bellini’s opera La Sonnambula (The Sleepwalker) suggests, Zona works best on a dreamlike level.

While some of the outrageous monologues elicit embarrassed chuckles, 2boys.tv dig deeper, exploring the central character’s identification with victimization and her internal struggle with sexuality and guilt. A scene where Lawson’s manic diva argues with a tiny projected image of him/herself is eerily beautiful but disturbing.

Aaron Pollard’s films, screened onto the most unlikely places, are an integral part of the piece, which defies logic but encourages discussion and repeated viewings. And damn, it’s all gorgeous to look at.

Strange that the work’s on a double bill with The Needle Exchange, a brief cabaret curated and hosted by the effervescent Keith Cole. The two halves couldn’t be more different. But Cole, after a clever opening ditty that references some of his more notorious shenanigans, proves a genial and clever host, helping his three guests (different each night) make the most of their talents and ensuring the whole thing wraps up in 30 minutes.