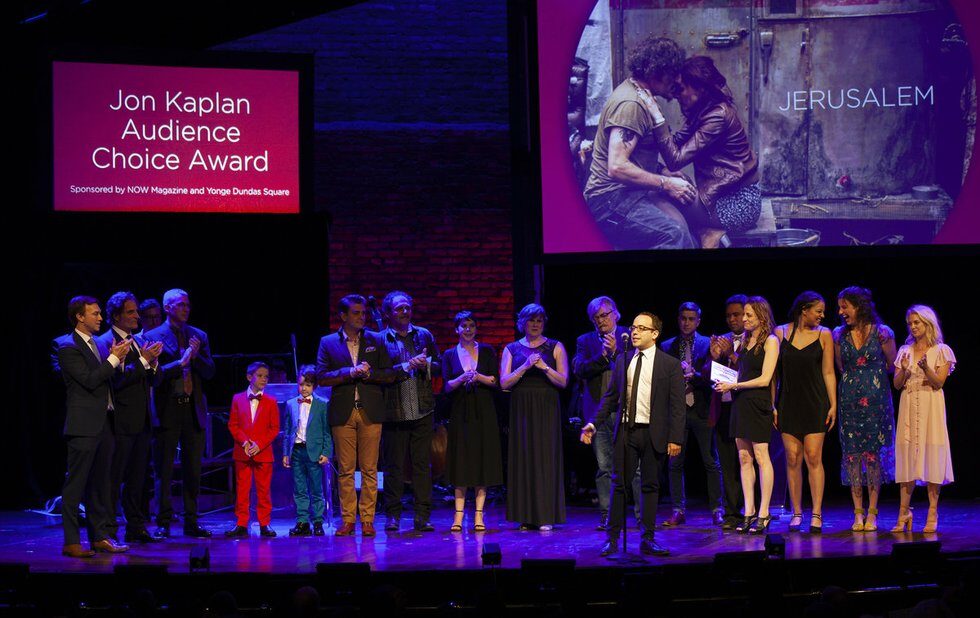 The locally created musical Life After and the British play Jerusalem both took home multiple Dora Mavor Moore Awards last night, as the theatre community celebrated the best of the past years professional stage productions in the Toronto Alliance for the Performing Arts award categories of General Theatre, Independent Theatre, Musical/Opera, Dance and Theatre for Young People divisions.

Early on, it seemed like the story of the evening could have been the off-stage tumult since January as prominent men in the industry were exposed for sexual misconduct.

Host Astrid Van Wieren, currently on Broadway as part of the ensemble of last years big Dora winner, Come From Away, hinted at the scandal in her opening monologue, referring to the big, galumping, handsy elephants in the room and invoking the #TimesUp hashtag.

But aside from sustained applause for presenters Trish Fagan (one of the four plaintiffs in a lawsuit filed against former Soulpepper artistic director Albert Schultz) and Michelle Monteith (one of a group of Soulpepper artists who publicly refused to return to the theatre until Schultzs resignation), there was no further mention of the scandals at Soulpepper and several training institutions.

If there was a political rallying cry of the evening, it was delivered by Evan Buliung, accepting an outstanding performance award for his role in the musical Fun Home as a gay and closeted father who eventually commits suicide.

Every day I see more in the news about repealing the sex-ed curriculum in our schools, and, fuck that! We cant regress, we have to move forward, he proclaimed, to roars of approval.

In her acceptance speech, Life Afters book, music and lyrics writer Britta Johnson thanked the Paprika Festival, where the musical exploring a teens grief for her mysteriously killed father was first workshopped, and the Toronto Fringe Festival, where Life After earned its first critical buzz. (The show will have its American premiere in San Diego next spring.)

More notable speeches included Evalyn Parry, accepting the second of Kiinalik: These Sharp Tools awards for outstanding sound design (for Parry and musician Cris Derksen) and outstanding new play (for Parry and co-creator/co-performer Laakkuluk Williamson Bathory), calling on the crowd to lobby federal Heritage Minister Melanie Joly (Nunavut is the only territory or province without a cultural centre) co-director Patricia Allison, accepting the second of Pool (No Water)s awards for outstanding performance ensemble and outstanding direction, urging more companies to incorporate diversity and accessibility into their work (the choreographer and dramaturg has written publicly about her multiple sclerosis diagnosis) and Michaela Washburn, accepting her outstanding performance award for her roles in Confederation & Riel (Im the first female in a VideoCabaret show to play a lead male role), and quoting her main character, Louis Riel: My people will sleep for one hundred years, but when they awake, it will be the artists who will give them their spirit back.

Coates, returning to the stage after a 25-year absence while busy in film and TV roles such as Sons Of Anarchy and Prison Break, thanked the community for the warm welcome back, and praised the onstage work hes seen here.

I saw Come From Away over on King Street [at the Royal Alexandra Theatre] last week, and cried almost the whole way through.

A full list of last nights awards, as well as a liveblog recap, can be found at Intermission.