NOW MagazineCultureTheatreDora Mavor Moore Awards 2018: who will be nominated?

Dora Mavor Moore Awards 2018: who will be nominated?

Jurors vote on the annual list of the best in Toronto theatre, dance and opera starting this week. Here are some names that should be top of mind. 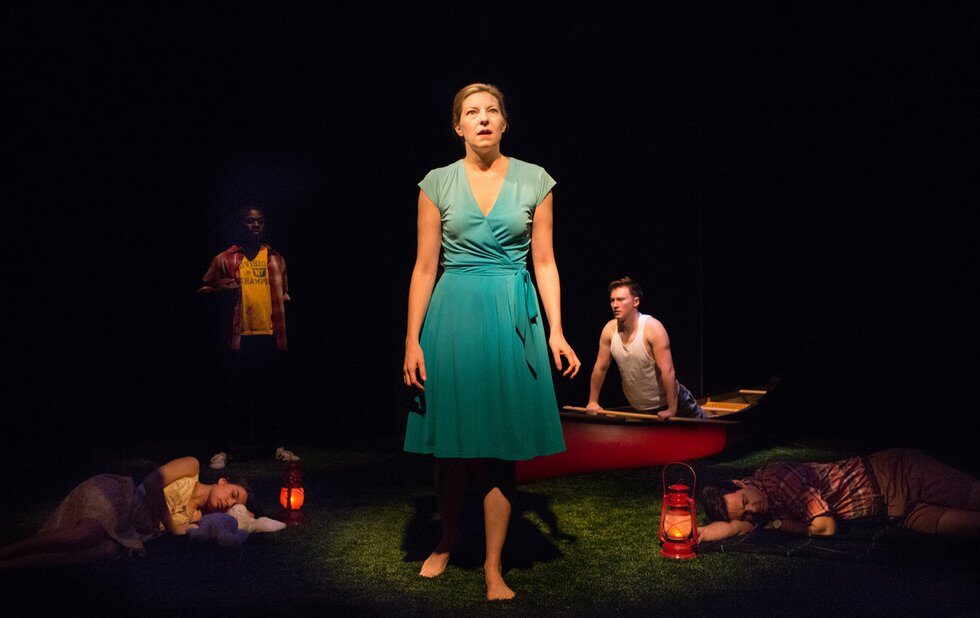 The first ballots for Dora Mavor Moore Awards nominations are due this week, so I thought I’d try to predict the nominees. Play along at home! Or if you happen to be reading this during intermission at a show, pencil in things you think I’ve forgot in the margins of your theatre program! (I’ll weigh in on outstanding new play and new musical/opera categories later on.)

In the interest of brevity, I’m only commenting on theatre, not dance, opera or theatre for young audiences. I’ve decided against splitting these observations into “General” and “Independent” theatre categories.

The Toronto Alliance for the Performing Arts will announce the actual nominees on May 31. For more info go to tapa.ca.

Beaty won the Dora last year for The Last Wife, but in Hannah Moscovitch’s coming-of-ager, she got to show off something new: simultaneously acting as narrator and sex-obsessed central character, she was comic, sensual and awkward, all done with complete confidence.

Let’s hope: Vivien Endicott-Douglas isn’t shut out of the race for either Lo (Or Dear Mr Wells) or Category E. Acting since her teen years, she’s emerged as one of the strongest performers of her generation. And I fear there won’t be room for Laakkuluk Williamson Bathory’s ferocious performance in Kiinalik: These Sharp Tools, though it’s probably unlike anything a Dora juror has ever sat through before. 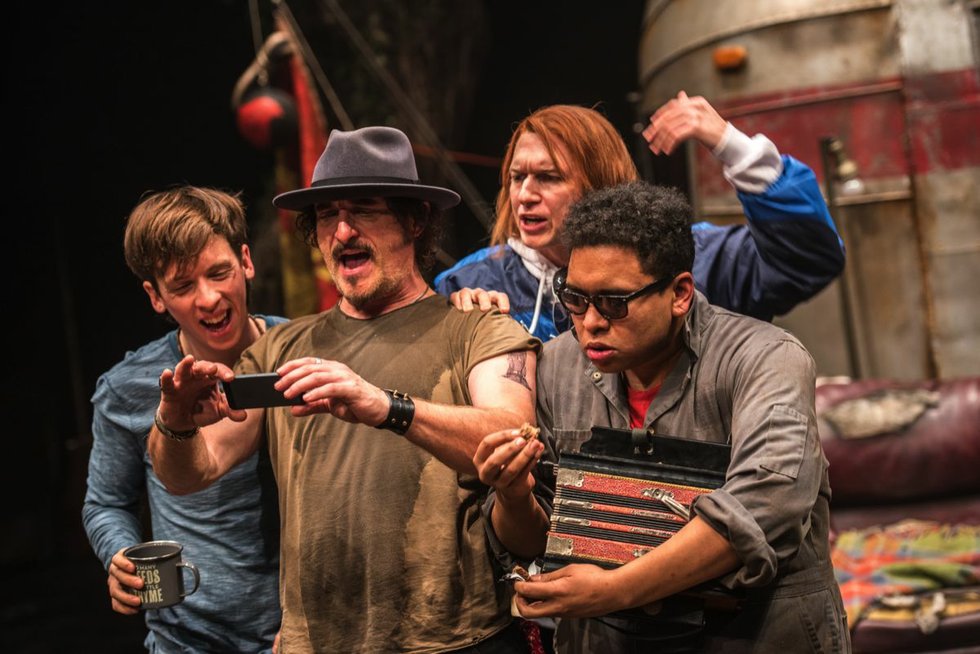 Kim Coates (centre) is a shoo-in for a Dora nomination, as is set designer Nick Blais. (Photo by Dahlia Katz)

I wasn’t as blown away by Coates’s return to the stage as many, but in the months since seeing Outside the March’s sold-out production, his grizzled, glamorous and dangerous turn as a troubled Pied Piper railing against the evils of the modern world has stayed with me. He’s guaranteed a spot on this list, and probably the win. 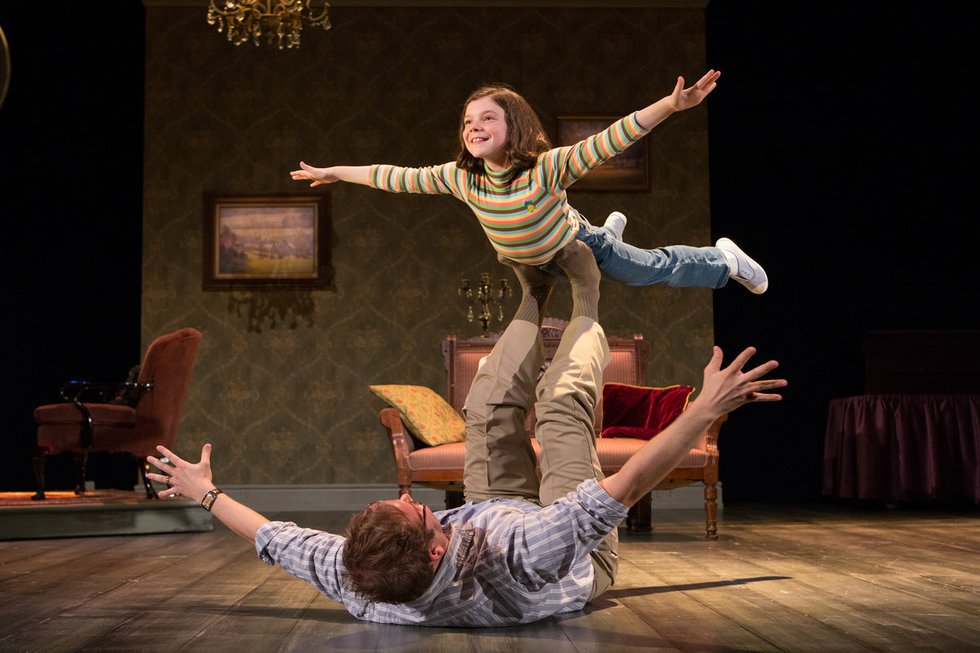 Many who saw the Broadway production and this co-pro by Mirvish and Musical Stage Company thought Buliung did a more convincing job as the show’s closeted father than the Tony Award-winning Michael Cerveris. No wonder. Lusty one moment, full of fury the next, then tender and remorseful, Buliung captures all the conflicts and contradictions of this heartbreaking character.

Let’s hope: one or both of the two Mandarin-singing performers from Njo Kong Kie and Wong Teng Chi’s Mr. Shi And His Lover, Jordan Cheng and Derek Kwan, get remembered for their haunting turns singing in a variety of genres. And in a just world, Joel Cumber‘s oddball Amish character from Rumspringa Break! would be recognized.

Gillis has always been one of those artists whose feelings register even to someone in the back of the theatre will anyone who saw it forget her poignant scene in Spoon River? She was the emotional centre in Amiel Gladstone and Veda Hille’s indie rock take on the Tchaikovsky classic, and a Dora nomination seems assured.

Other likely nominees: Chilina Kennedy (Beautiful: The Carole King Musical) Ellen Denny (Life After) and all three Alisons in Fun Home (Laura Condlln, Sara Farb, Hannah Levinson), although they could end up scoring an ensemble nomination instead. 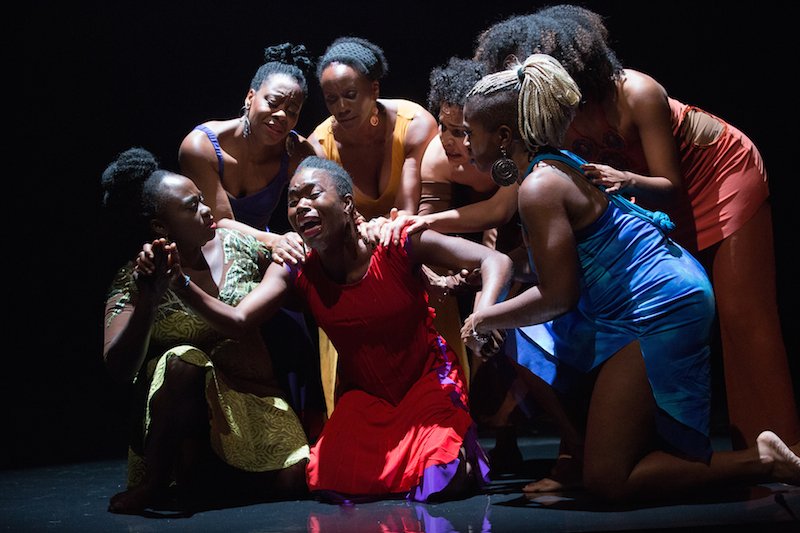 The actors in for colored girls who have considered suicide / when the rainbow is enuf, performance by an ensemble

Performances like these are why there’s an ensemble category in the first place. How else could voters single out one person from among great actors like Akosua Amo-Adem, Ordena Stephens-Thompson, Karen Glave, Tamara Brown, d’bi young anitafrika, Evangelia Kambites and Sate?

You don’t often get the chance to turn a theatre into an English forest, but that’s what Blais accomplished in his immersive set for Jez Butterworth’s play. Seldom has walking into a show been so thrilling.