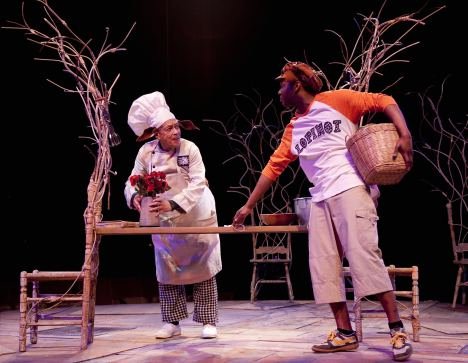 Can’t afford a winter holiday? You can still take your kids to the Caribbean by visiting El Numero Uno at the Lorraine Kimsa Theatre for Young People.

But with thefts, a drought and mysterious noises in the scary Grey Forest, the lesson doesn’t go as planned. Then Uno is kidnapped by warthog-like sibling beasts (Borden and Jamie Robinson) and must be rescued by his friends.

The production, directed by ahdri zhina mandiela, is filled with eye-catching visuals and lively and comic performances, including those of John Blackwood and Jajube Mandiela as a rabbit family, Lisa Codrington as a dove and Sabryn Rock as a neighbourly cow.

Played in the round, the show is finely costumed by Astrid Janson, with lighting by Kimberly Purtell and sound design by Cathy Nosaty.

The director’s given it an extra jump-up energy by opening and closing the show with a music-and-dance display that owes a debt to island -masquerade, not unlike our Caribana parade.

Mordecai’s inclusion of bits of Spanish and French, as well as a Rasta character and mentions of griots and duppies (poet/storytellers and ghosts), is a great idea. The result is a show with a pan-island feel.

But the narrative itself could use some work. It takes a long time to get to the central story of Uno’s kidnapping, and there’s also an awful lot of plot thrown into the last part of the show. At times it’s hard to sort out what’s happening and why.

There’s a moral, too, as with all fables – Uno learns the importance of honesty, obedience and courage – but it’s sweetly wrapped in a colourful package of entertainment.