Five Faces For Evelyn Frost will make you swipe right

Critique of social media habits is disturbing but totally clicks 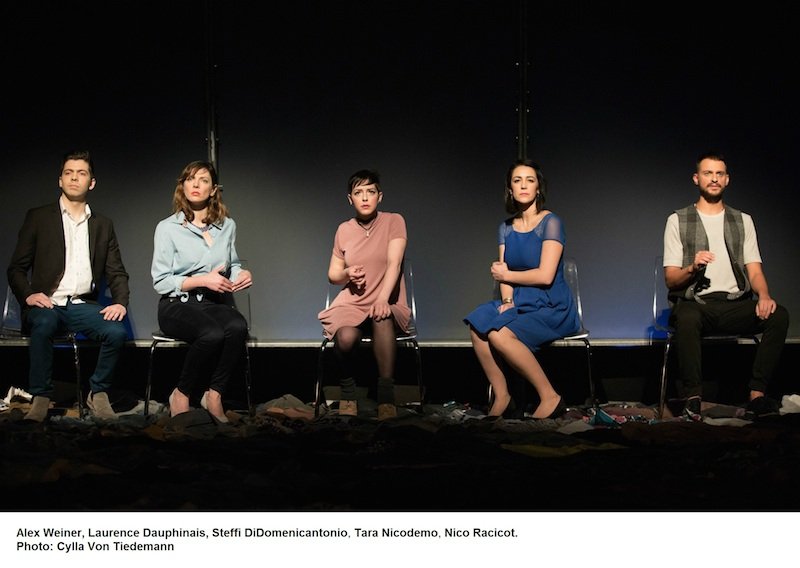 You won’t update your online profile or hit that like button so quickly after witnessing this avant-garde exploration (and scathing critique) of our social media habits.

Written by Montreal’s Guillaume Corbeil (this English premiere was translated by Steven McCarthy), the play is a stream of rapid-fire statements, delivered by a chorus of five Millennial friends (Laurence Dauphinais, Steffi DiDomenicantonio, Tara Nicodemo, Nico Racicot, Alex Weiner) in direct address to the audience, giving body and voice to various ethereal social media activities like filling out a profile, liking various artists, tagging friends and locations in photos and commenting.

In the first 15 minutes the characters establish their machine-like line delivery via overkill, rapidly spouting lists of literally hundreds of bands, films, books and plays, like an overloaded profile data dump. This can get a little monotonous and tiring (that’s kinda the point) but here it’s important to resist the urge to mentally swipe left they’re setting up a unique form of storytelling in the vein of Joyce and Beckett.

The action continues in this automatic fashion, but a dark and disturbing story told in snippets and projected snapshots from five different perspectives begins to take shape, highlighting important contradictions and tensions inherent in social media: mainly that online activities construct misleading representations of our lives, but also that these digital systems amplify very real existing human and social qualities like vanity, compulsion and intersectionality (to name only a few).

Director Claude Poissant keeps things minimal and symbolic, relying mainly on the script, projected visuals and some interesting set design – like a cool mirrored floor that slowly gets uncovered – to make the show click.

This bleak, dystopian view of social media is uncomfortable to watch both in form and content, but the spot-on critiques designed to agitate are badly needed – especially with a Twitter fiend in the White House.