Waawaate Fobister brings down the house at solo Buddies opener 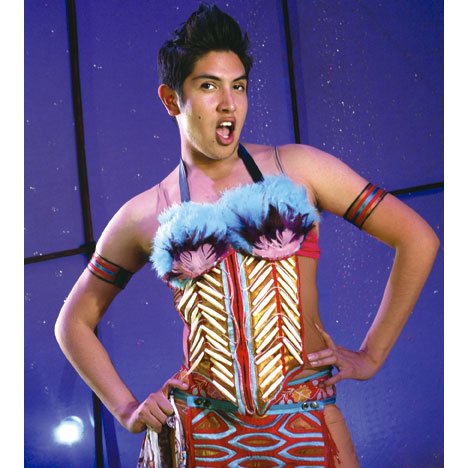 Buddies kicks off its 30th season with a play that bodes well for the future of queer theatre. Its theme is coming out – nothing new there – but the voice telling the story is fiercely honest and original.

Waawaate Fobister’s solo, multi-character debut play, Agokwe, focuses on the attraction between two vastly different Aboriginal teens. Jake is a lively and animated grass dancer from one reserve, while Mike is an emotionally distant star hockey player from another. The two have eyed each other before, but it’s only during one momentous hockey tournament weekend in Kenora that the secret spark they once shared begins to ignite – with disturbing results.

The script, dramaturged by director Ed Roy, is a model of economy and shifting moods. Fobister knows what to tell and what to leave out, and the tale is enhanced by its tapestry of voices, which include Goose, Jake’s gossipy and flirtatious cousin who’s got a thing for Mike herself (a comic highlight is her outfit-changing scene) and Cheyenne, the shy girl that Goose is trying to set up with Jake.

Fobister, a trained dancer, expertly delineates his characters with a swagger, shrug or slouch. One of his most moving characters is the physically closed-in Betty Moses, Mike’s alcoholic mom, a study in quiet desperation and faith.

The most boisterous character is that of trickster Nanabush, who alternately provides information, warning and melodramatic suggestions in his role as narrator – imagine Cabaret’s emcee on the rez. Fobister pulls out all of his performer’s stops as Nanabush, especially during a mid-show surprise.

The actor is less comfortable playing Mike. And while sometimes his enunciation trips him up, listen to the way he captures the music and rhythm of a character’s speaking voice.

Erika Isteroff’s costumes are sexy and suggestive of both genders, appropriate since Agokwe means two-spirited, or having both male and female aspects in balance. Andy Moro’s bold set includes screen projections and a recessed playing area where Fobister spends most of his time. Kimberly Purtell’s lighting helps shift tone expertly.

Sit close. That playing area is quite far from the stage, and you don’t want to miss any of Fobister’s performance.