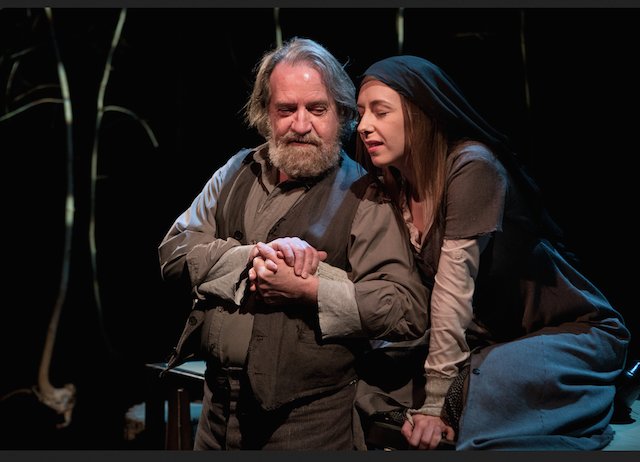 Most of us remember Albertas Wiebo Ludwig as the so-called eco-terrorist who bombed Encanas oil wells that were poisoning the land on his Christian compound. A fascinating, often misunderstood figure, he was called a fanatic by people who compared his extreme religious dogma to his political strategy.

Maria Milisavljevics play attempts to find the humanity behind his actions and, thanks to Layne Colemans performance as the commune patriarch, is almost successful. But director Richard Roses staging tends to sabotage the piece.

The one-act play is divided into two parts, each defined by the Ludwig familys most notorious actions. It begins with a bombing sequence thats looped into the narrative several times as the family faces gas leaks so extreme that a match makes their water go up in flames and their animals and Ludwigs daughters (Sarah Sherman) miscarry. Complaints to the gas company and governments are ignored.

The second section is defined by a shooting. When Ludwig returns from prison, the family grows increasingly isolated, harassed by the townspeople who have abandoned them. Eventually, Ludwigs son (Benjamin Shutherland) shoots and kills a young girl joy-riding with other teenagers on the compound property.

In both cases, the idea is to make sense of the violence and how those actions shattered the Ludwig clan. On that narrative level, the play works. Wiebos passion for the earth and his love of family and God are authentic the final tableau is gorgeous.

But Curtis Wehrfritzs set, though beautiful, tends to sink the piece. Festooned with barren trees, it forces the actors to duck and dip as they run through the forest, so much so that it becomes distracting. Apart from those sequences, the action is almost entirely staged at a single large table, which makes the action in the play static.

Milisavljevics decision to focus only on Wiebos immediate family means we dont see how he led his larger community a key element of any portrait of him. And the narrative doesnt make enough of how spectacularly media-savvy he was. He made sure to film every one of his interactions with gas companies and government representatives. Staging that could have intensified our understanding of how a seemingly paranoid individual actually coped with reality very well.

The characters, except for Wiebo himself, tend to be types, but that seems intentional. Janet Laine Green plays Wiebos wife as a calming influence she sings a lot of hymns. Sutherland, as their increasingly alienated son, fumes appropriately. And as their daughter, Sherman is fiery and occasionally ecstatic. Its a strong performance by a charismatic actor.

But Colemans the key here. He finds that balance between fanaticism and passion, his face almost always upturned as if consulting with his God.

Its too bad the production just misses.