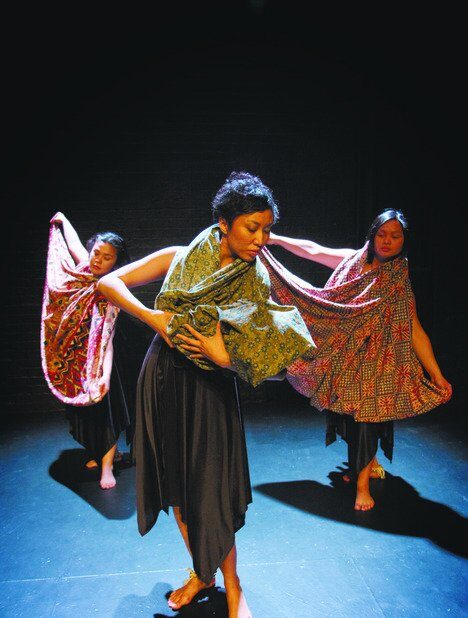 They jingle melodically each time the actors take a step, but there’s also the suggestion of enslavement.

That metaphoric servitude is a major theme in this show based on the experiences of Filipino women who come to Canada to work as nannies. They send their wages back home, and hope after 24 months of employment to become citizens and bring their own families to Canada.

The script is based on interviews conducted by the company, but it draws as much on traditional Filipino dance and music, created with the help of collective member Romeo Candido.

The production’s strength lies as much in the powerful use of these arts as in the contemporary story of women exploited by sometimes condescending employers and inflexible government programs.

Just as striking is the use of the malong, a tubular, multicoloured skirt transformed by the actors into babies, ceremonial garments and a backdrop for the action.

Forced to communicate with their own families by telephone, unable to bond with their children, eking out social time when they take “their” children to the park, these women still have great hopes for the future.

Though some of the stories need filling out, there are strong moments of drama in the brief production. The best – a demonstration that these women haven’t lost their spirit – is a monologue in which Ancheta’s character comforts her infant Canadian charge while allowing her own anger and frustration to surface. It’s an exciting blend of honey and gall.