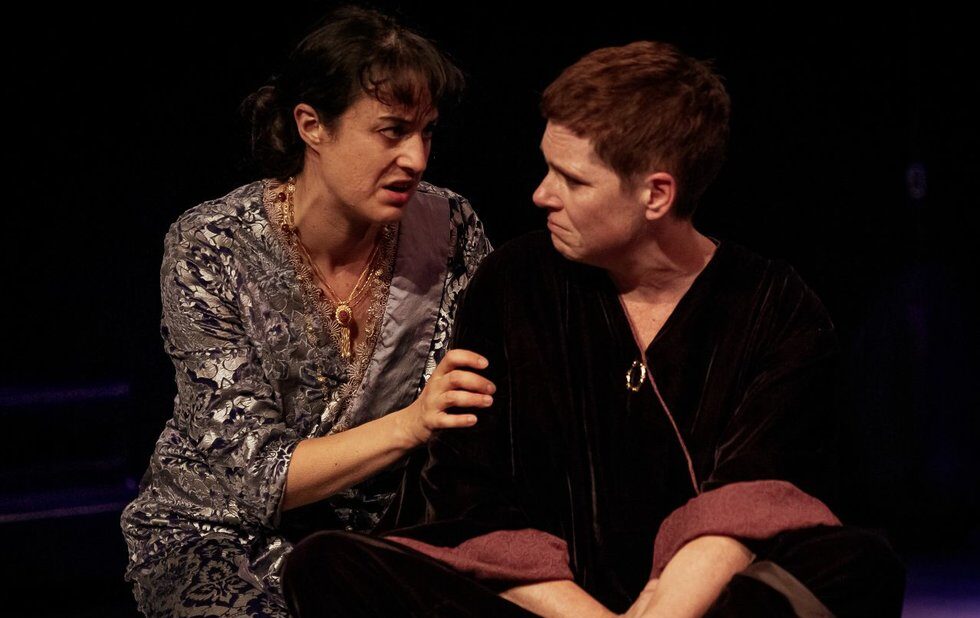 Buddies In Bad Times launches its 40th anniversary season with a remount of Gertrude And Alice. The stunning production, which has undergone a few modifications for this version, reflects the passions, idiosyncrasies and inventiveness of its namesakes.

The two-hander chronicles the romantic, sexual, social and work life of 20th-century literary icon Gertrude Stein (Evalyn Parry) and her devoted partner of nearly 40 years, Alice B. Toklas (Anna Chatterton). It proceeds chronologically from the day they meet in 1907 until Stein’s death in 1946, and eventually Toklas’s death in 1967.

Chatterton and Parry conceived and created the piece along with dramaturge and director, Karin Randoja. The result is a deep dive into two fascinating lives. It quickly becomes apparent that Stein is and was a household name that few people really know much about, with a brilliant mind that even fewer truly understood. She thrived with Toklas as her lover and constant companion – they say they never spent more than a few hours apart.

Both performers immerse themselves in their roles to create the couple’s symbiotic relationship. Parry’s Stein commands the stage with a resonant voice. Often pompous and always verbose, she moves like royalty, confidently and emphatically taking up space. Parry recites Stein’s poetic tongue twists with total assurance. Chatterton’s quiet power as Toklas emerges as the play progresses. She defines Toklas through unique speech patterns and physicality: stooped posture, sombre facial expressions and a persistent need to busy her hands.

The opening scene plods at first, but magic occurs once the couple meet. The script is fact-filled, yet often playful. Upon entering the theatre, everyone receives a booklet (by Kilby Smith-McGregor) brimming with photos and notes detailing the pair’s timeline. When uncomfortable situations arise, they evade full-out confrontation by having Toklas instruct the audience to just read about it.

Colour permeates the play, weaving itself into the text such as when Toklas describes Stein as a golden-brown presence. It’s in Ming Wong’s rich-hued costumes and in Michelle Ramsay’s warm lighting design. Randoja’s staging is fluid and almost dance-like between the two characters. Production elements often combine to create illusions, especially memorable when Stein dies.

Sherri Hay’s set, with moving components powered by sand and gravity, almost seems alive. Equal parts sculpture and installation, some pieces even unscrew to become props. The entire production feels masterful and modern, like the genius painters Stein collects and hangs on her walls.