NOW MagazineCultureTheatreGirls Like That has tremendous energy almost too much, in fact

Girls Like That has tremendous energy almost too much, in fact 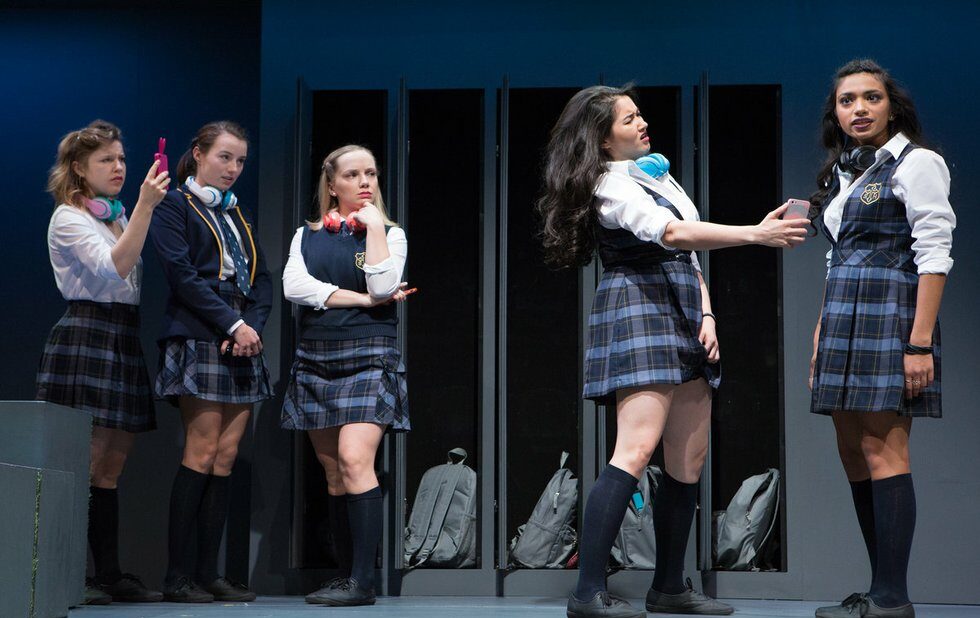 Tarragons production of Evan Placeys 2013 British play Girls Like That has worthy values, some magical choreography and a terrific and committed cast. But the players havent figured out how to let the audience breathe and take in some of the scripts deeper moments.

Maybe it was opening-night jitters, but the seven-member troupe, directed by Esther Jun, never quite got the rhythm that comes with listening to what the other actors are saying.

The story is strong. Besties since they were five at an elite primary school, a group of girls hit high school and then turn on one of their own, Scarlett (Shakura Dickson), when a naked photo of her goes viral.

Performed on designer Shannon Lea Doyles moveable set of blocks with lockers lining the back of the stage, the play unfolds as a series of near sketches, in which the girls interact and comment, revealing their insecurities (especially about their bodies), an unconscious cruelty and the importance of the pecking order Scarlett was always at the bottom.

In a series of flashbacks going back to the 1920s, 40s, 60s and 80s, monologues underline the feminist history that is not only an essential element to the plays narrative arc, but suggests those rebellious women of the past ought to have begotten something more enlightened than this band of mean girls.

Placey cleverly contrasts the teens reactions to Scarletts nude photo a chorus of slut-shaming with their swooning admiration of the pic of a male student thats similarly gone viral. And as the actors move in and out of their roles as both girls and boys, the males demonstrate their dumb swagger the girls, a vicious silence.

Scattered among the complex scenes in which the girls exchange one liners are a series of dance sequences displaying the versatility of the cast. Expertly choreographed by Alyssa Martin, the sequences are high-energy and edgy, flaunting the casts obvious talent.

The actors, all of them well out of their teens, are excellent, mostly sustaining their English accents and doing fine physical work as five-year olds, teenagers and high school boys. Lucy Hill is a standout dancer and handles her monologue as a 1940s Royal Air Force pilot with panache. Playing the most intelligent girl of the bunch, Allison Edwards-Crewe radiates ambivalence and almost steals the show with a monologue on sexual harassment. And Tess Benger has the most charisma and the best vocal technique. More of that from the rest of the ensemble might have helped reduce the shriek factor, which sometimes becomes irritating.

Dickson, as Scarlett, is the weakest (but not by much) of the group unfortunate since she isnt able to sell the plays climactic speech. Without some dramatic oomph, her monologue doesnt provide a proper payoff.

Still, Girls Like That is fine fodder for important conversations, a show laden with wisecracks and wisdom that can engage both a teenage and adult audience, even if it misses a few beats.