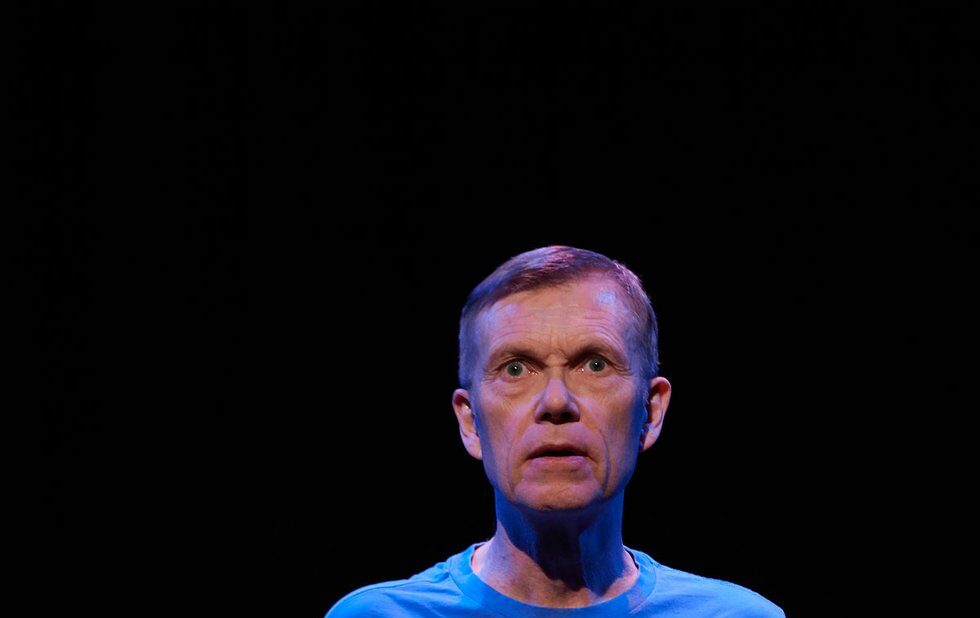 I didn’t publicly identify as queer until my 30s, so in many ways I avoided the hardships and scariness of coming out as a teen. Even though I knew that I was bisexual all along, I managed to ignore that part of me – until I couldn’t. That’s what makes Greg Campbell’s solo show OUT so beautiful as a queer coming-of-age story: the lead, Glen, honours and explores what it means to be gay, despite disapproval from his parents.

In 1977, Glen is living at home in Montreal with his Irish immigrant parents. By today’s standards, most people would consider Glen’s parents to be homophobic – and they are, using language that elicited discomfort in most of opening night’s largely queer audience. But during the time between the Stonewall riots and the AIDS epidemic their views would have likely been typical.

Glen pursues a career in theatre, at one point sashaying his way around the stage in a production of The Boy Friend while hilariously suffering from his first bout of crabs. And at night he frequents a gay disco with his best friends, out-and-proud Mario and closeted Dmitri. While his parents take turns questioning his sexuality, Glen doesn’t budge, until a life-changing trip to New York City for the Pride march. Glen returns to Montreal uninhibited and proud to identify as gay.

Campbell portrays over 20 characters, with dozens of accents (including a memorable English boy with a speech impediment) in this whirlwind production, often switching between up to three characters in a given scene. He does this with impressive ease, and his characters are vibrant and believable.

Director Clinton Walker’s well-defined staging gives intimacy to moments and makes good use of the dynamic Cabaret space at Buddies. The only time that audiences were jerked out of the story was a singalong with guitar-strumming bigot Anita Bryant – for which Campbell ran backstage and returned in an ill-fitting wig. The song, an original folky tune called Kill A Queer For Christ, produced some laughs, but felt clunky and jarring compared to the rest of the production.

In a time when homosexuality is still targeted in many countries and political leaders incite hate groups, OUT’s message – that being true to yourself is more important than anything else – feels more urgent than ever. Even to a now-openly queer 30-something in Toronto, that reminder is just as valuable.