Grimly Handsome could be more cohesive 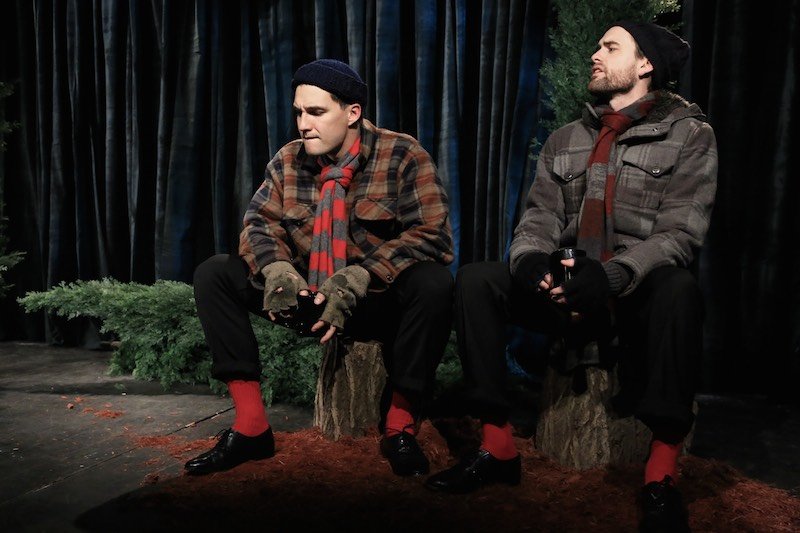 Imagine an episode of Law & Order written by a cynical philosophy student and youll have a good idea of Grimly Handsome.

Julia Jarchos intriguing play uses the tropes of the thriller and the police procedural to look at things like urban alienation, power dynamics and sexual selection.

In an unnamed American city, two immigrant Christmas tree-sellers (Jeff Irving and Ben Sanders) display their wares, one of them convincing a shy, bookish woman (Julia Course) to join him for a cup of coffee.

After the womans body turns up butchered, two cops (Irving and Sanders again), one of whose wife is having an affair with the other, investigate, aided by a possible male eyewitness.

No spoilers about the surprising final scene.

Director Jay Turvey isnt going for naturalism here theres something artificial about Christine Urquharts cramped set and colourful costumes, and Mikael Kangass lighting design seems intentionally harsh. One of the most effective elements is the score by Paul Sportelli and John-Luke Addison, which becomes more sinister as the show progresses.

The actors, best known for their work at the Shaw Festival, find layers of subtext and innuendo in the dialogue. Course is especially fine at disappearing into her very different characters (she plays both the wife and eyewitness).

But the impact of the show is slippery and evasive, and Turvey never finds a consistent tone, resulting in a series of scenes that dont come together into something cohesive.