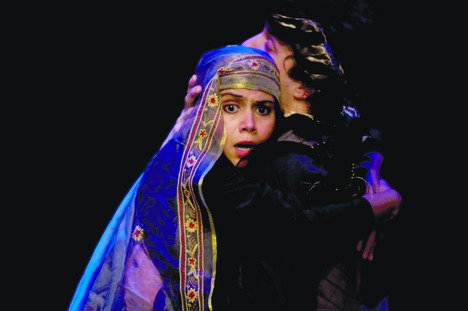 Pragna Desai and Dan Watson get a grip on Grimm.

Theatre Smith-Gilmour is one of the most consistently enjoyable theatre companies in Toronto. But GRIMM too, based on 10 lesser-known fables by the Brothers Grimm, falls short of their best work.[rssbreak]

They’re known for making theatre out of groups of stories by Chekhov, Katherine Mansfield, Dante and others. Their plays aren’t really storytelling, although there’s often a lot of telling. Rather they’re a hybrid, brought to life with a touch of clown, economical stagecraft and an eye for the telling physical detail.

All of that’s present here, but the works (and characters) have less psychological depth than Chekhov’s or Mansfield’s, and hence aren’t as memorable.

Things get off to an amusing, if strange, start, with the house lights up and Dean Gilmour telling a series of whimsical, imaginative lies. What follows, a fable about two brothers (Adam Paolozza and Dan Watson) who attempt to steal the moon, makes fantastic use of light and a few simple props.

Many scenes feel like vignettes, prompting the viewer to wonder if they’ve really ended. And as in tales from Ovid, there’s often a moral and a transformation from animate to inanimate object.

Some stories, like one involving a frog, could have been excised. And a stronger through line – perhaps something involving a forest? – would have given the show a sturdier structure.

That said, the performances are generally strong (Gilmour’s dog is worth the price of admission), and the design elements – including simple peasant costumes and a well-used raised door in the background – always aid in the storytelling.

But it’s not until the final two episodes, one about a Rumplestiltskin-like hedgehog who helps a king, the other a bleak cautionary tale about greed’s consequences, that the piece begins to mine the kind of rich humanity of the company’s better works.