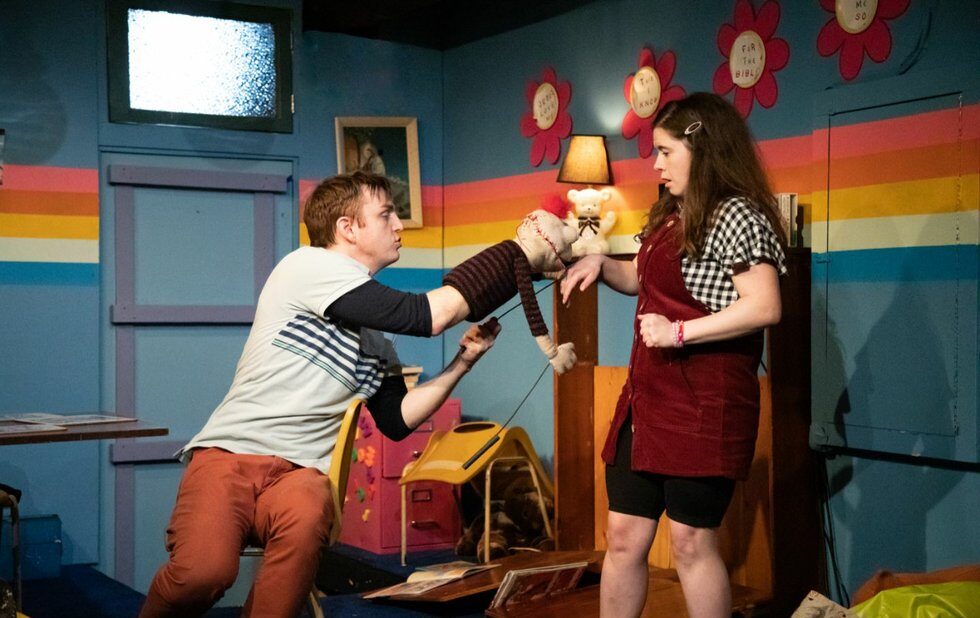 Robert Askinss Hand To God is so damned entertaining literally.

The 2011 play getting its long-awaited Toronto premiere by Coal Mine Theatre is many things: a satire about religious hypocrisy, a clear-eyed look at good and evil, a gentle teen love story and a raucous, raunchy examination of what happens when we suppress our natural urges. Plus: theres a demon puppet!

Somewhere deep in the Bible belt, the young widow Margery (Nicole Underhay) runs an after-school kids puppet workshop in the basement of a neighbourhood church.

There, her shy son, Jason (Frank Cox-OConnell), his secret crush, the precocious Jessica (Amy Keating) and bully Timothy (Francis Melling) are busy putting the finishing touches on their puppets for an upcoming Christian-themed show.

The nerdy Pastor Greg (Ted Dykstra) is interested in Margery, but, as we soon find out, shes tired of being a nice, respectable woman. At the same time, Jasons puppet, Tyrone, begins taking over his owner, pawing at Jessica, getting back at Timothy and blaming Margery for the death of her husband. Is Tyrone or Jason possessed by the actual devil?

The brilliance of the show is how it mashes up motifs and imagery from kids shows, horror flicks and Christian kitsch. (Yes, theres a bobble-head Jesus.)

Director Mitchell Cushman has a firm hand on all of the elements. Anahita Dehbonehies playhouse of a set opens up to reveal lots of surprises as the show progresses, and Marcus Jamins puppets particularly for Tyrone have a life of their own.

But its up to the cast to make their characters both flesh and blood and felt believable and involving. Underhay communicates Margerys many contradictions with the intensity of a Tennessee Williams heroine, while Dykstra, his hair slicked back, is sweetly pathetic in the first act, impressively resourceful in the second.

Melling and Keating have a wickedly fun rapport as bickering teens on opposite sides of the IQ spectrum. Each gets their moment to shine, Melling physically and Keating in the shows climax, which more than lives up to that word.

But its Cox-OConnell who impresses the most, switching easily between the meek Jason and the growling, id-driven Tyrone. Youll really believe hes two characters, especially in one scene in which Jason, while in bed, is literally lifted up by his increasingly powerful friend.

The second half cant quite live up to the momentum and originality of the first, and its a bit of a tease to mention an upcoming Christian puppet show in the plot and then not deliver one.

But these are quibbles in a show that takes on big themes like good and evil and serves them up with devilish fun.