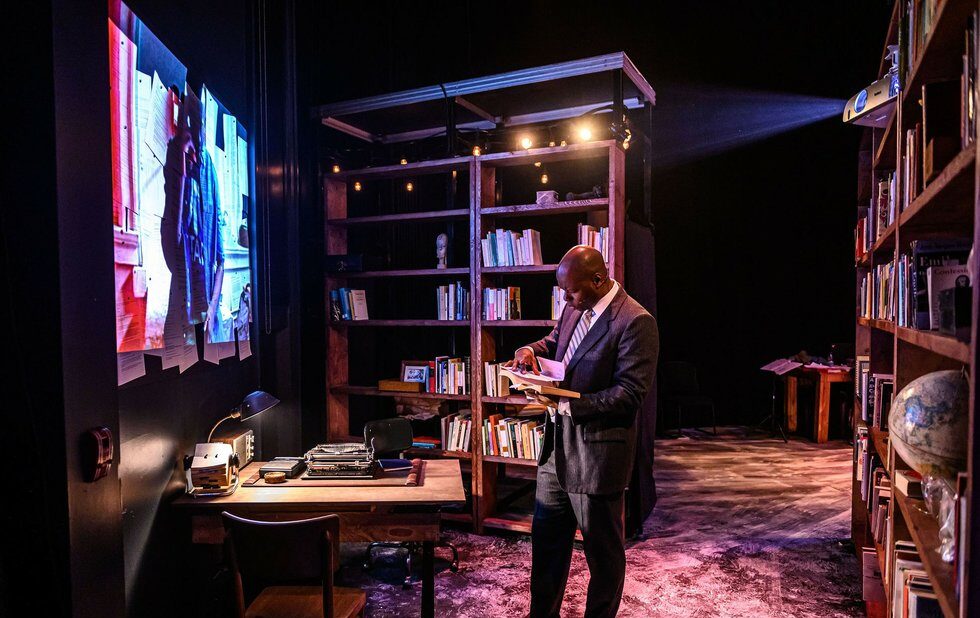 Incubated in the Theatre Centres Residency Program, this inventive production weaves lived and imaginary experiences of oppression and schizophrenia into a powerful immersive show that will have a lasting impact on its audience.

After the initial scene, were let into the main room, followed by the actors, who perform intermittent scenes. The rest of the time we roam freely through the various sections: an old patient room containing two beds Fanons library, surrounded by bookshelves covered in philosophy and literature strips of booths, on the side of which are projected images of Chauvet speaking and headphones to listen along to various short monologues of his experiences as a patient.

There are other headphones distributed throughout the space some hanging from the ceiling, others on chairs where you can listen to personal accounts of actual schizophrenic patients. We are encouraged to interact with the set by reading papers and books, examining pictures and paraphernalia in Fanons library.

I wondered if there was enough to occupy a wandering audience for the full hour and 45 minutes, but Trevor Schwellnuss set design is so intricate and engaging that the time flew by. His design allows the audience to flow in and out of spaces without congestion while reflecting the increased scattering of Chauvets mind.

The chemistry between the actors is evident, and some scenes are hauntingly resonant illustrations of Chauvets mental unravelling. The final scene brings us back to the present, where Eduard tries to help his father externalize his voices through a virtual reality program. Its an interesting technique, but because the rest of the story veers away from their relationship, its hard to feel invested in the emotional stakes of their dynamic.

This rich collaboration Leah Cherniak is credited as co-creator and co-director, Mumbi Tindyebwa Otu as co-director and Schwellnus as co-creator is a sophisticated work of art that offers creative and effective ways to imagine what most of us will never experience, opening pathways to understanding some of the most marginalized and vulnerable members of society.