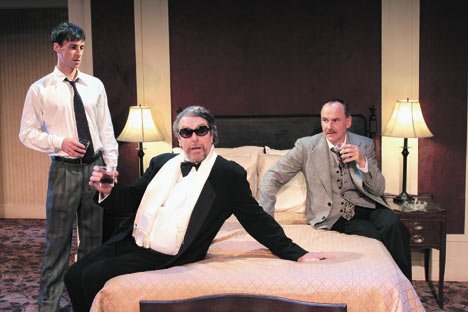 His Greatness (l - r) Greg Gale as the "Young Man

If you’re going to write a play about Tennessee Williams, with references to other stage legends like Arthur Miller and Edward Albee thrown in, you’d better have the talent to back it up. Daniel MacIvor needn’t worry. His Greatness more than lives up to that title it’s a brilliant work, equal parts homage, queer history play and meditation on the power of theatre and the imagination.

It’s based the real-life 1980 visit to Vancouver by the way-past-his-prime Williams for the “premiere” of a play, actually a revision of a work that had bombed earlier in the UK. In a hotel room, the Playwright (Richard Donat) is fussed over by his no-nonsense Assistant (MacIvor), whose duties include procuring a Young Man (Greg Gale) to escort the writer on opening night.

In a series of sharp, well-rounded scenes all set in the same room, MacIvor takes us through the lead-up to the big night and then the drunken aftermath as the three men, each desperate in his own way, grapples with his illusions.

MacIvor has lots of fun with the rituals of theatre life, from the pre-show radio interview to the anticipation of the reviews. He’s especially skilful in filling in backstories, which never feel like exposition but emerge naturally from character and situation.

But this is more than a backstage play it’s also about codependent relationships of any kind. Listen to the dialogue: each man defined by his words, from the poetic and charming ramblings of the playwright to the street-smart cadences of the hustler.

Ed Roy’s production is superb. Kimberly Purtell’s set and lighting are so evocative you’ll swear when characters look out the hotel window they’re seeing something besides their own broken dreams. Lyon Smith’s sound design makes nice use of a Beethoven sonata.

MacIvor and Gale spark off each other effectively, bringing out the competition between them, but it’s Donat’s old writer, bloated and full of tired bravado, who leaves the most lasting impression.

The play’s final lines, especially during a time when arts funding is in jeopardy, should resonate with anyone who knows why theatre matters.