Wake up already - Hush's premiere has obviously been rushed 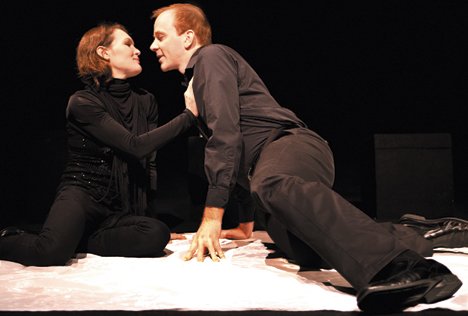 In the wake of the deserved success of Rosa Laborde’s last play, Leo, Tarragon Theatre is premiering the playwright’s follow-up before it’s ready. Hush feels like the second or third draft of a promising script. There’s a situation, a few ideas but little character or tension.

What follows is a series of nightmares (complete with some blood-curdling yowls) that bleed into more naturalistic scenes about the strained father-daughter relationship, along with a subplot about Harlem’s dental colleague Andre (Conrad Coates), who strikes up a strange friendship with Lily. Talia, meanwhile, seems not to realize that Harlem’s just not that into her.

Director Richard Rose does a serviceable job of lending the proceedings a waking-nightmare feel. He’s helped by Trevor Schwellnus and Patrick Du Wors’s black set and costumes, against which some twinkling blue stars and a ghostly white sheet stand out. Thomas Ryder Payne’s subtle music-box deconstruction of the Brahms lullaby also gets under your skin.

But in order for a play about dreams and nightmares to resonate – I’m thinking of Daniel Brooks’s Insomnia – it needs to be anchored in solid details and characters. People in this play yammer on about religion, vegetarianism and heredity, but their words remain abstract.

The character of Andre feels especially underwritten, and you can see Coates struggling to locate his character’s motivation.

Somerville and Rosling are more successful at suggesting emotional depths where there are none on the page. And Rosling also gets to show off some great comic timing.

Just a side note to storytellers of all kinds: I’m sure your dream last night was totally freaky and profound, but it’s usually never as interesting as you think it is.[rssbreak]