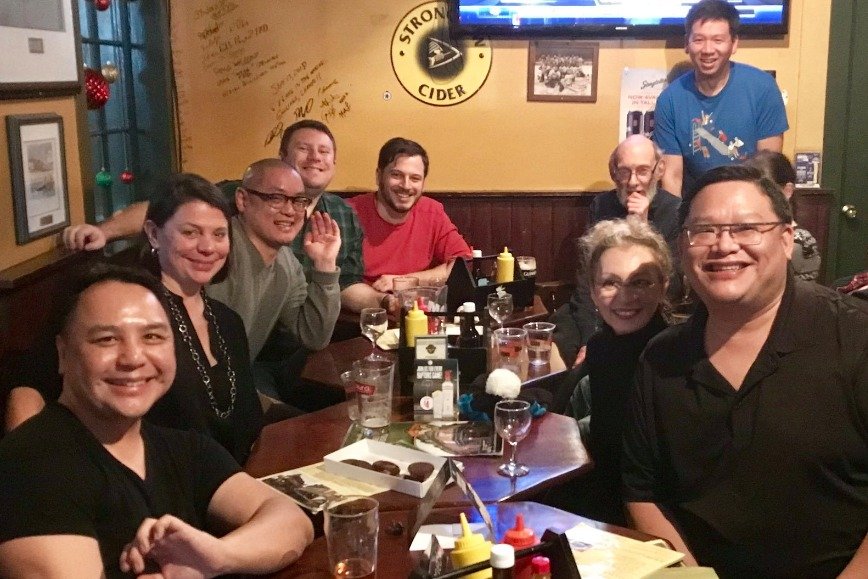 Wayne Leung, one of the most beloved theatre critics in the city, died earlier this week.

“It is with great sadness that I announce the sudden passing of my brother, Wayne Leung, on July 15th from a suspected heart attack,” wrote Leung’s brother Howie on Facebook yesterday. “I am in shock and can’t believe I lost my brother at such a young age.”

Leung, 38, was managing editor at Mooney on Theatre, a popular Toronto theatre website, and over the years he contributed hundreds of well-written, observant reviews to the site.

“He was one of my favourite reviewers in this city, always very thoughtful and kind,” wrote playwright and actor Graham Isador this morning on Twitter. “I really valued his opinion and will miss his voice a lot.”

Just last week I saw Wayne at the media preview of Outside the March’s site-specific, immersive show The Tape Escape. In the lobby, we talked about the touring production of Waitress and shared notes on our favourite Fringe shows. We both teared up talking about the musical Drama 101 and the memories of our own high school years the show had evoked.

Leung grew up in Ottawa and graduated from Lester B. Pearson Catholic High School in 2000. He went on to get a Bachelor degree in Aerospace Engineering from Carleton University in 2006. We once joked about how many Asian-Canadians interested in the arts had to get serious-sounding degrees to please their demanding parents before pursuing their true interests.

“I always liked saying that our managing editor was a rocket scientist,” says Megan Mooney, the founder and publisher of Mooney On Theatre.

Mooney clearly remembers interviewing Leung back in 2011 for an assistant editor position.

“Wayne had recently moved to Toronto from Ottawa, and he was taking time before looking for a real job,” she says. “He had volunteered at the Toronto Fringe and kept hearing about MoT –  that’s how he found out about us. Within a few minutes of talking to him, it was obvious he was perfect for the position. We had the same approach to theatre, business, problem solving.”

Within a year or two he had been promoted to managing editor, a volunteer position.

Leung’s day job was digital communications officer at Doctors Without Borders/Médecins Sans Frontieres. As part of his position, he got to travel, including a month-long stint in Beirut last year. (He would always share photos of his travels – especially the food – with his envious friends on social media.)

He had an encyclopedic knowledge about many things, including Cirque du Soleil shows. Whenever I wanted to know about the history of one of Cirque’s productions, I would ask him about it. He was also fiercely, proudly queer, and he often tweeted about social rights issues both local and international.

Wayne always greeted you with an enormous smile, as if nothing could get him down. He spoke quickly, his opinions fully formed, his enthusiasm and energy infectious.

As our mutual friend, Rachel Spiar, said to me this morning, “You were always in a better mood when you hung out with Wayne. He was accepting of everyone and always brought out their fun and sassy side.”

A few months ago, the three of us went out after a show for drinks. We discussed everything from the opera we had just seen to the upcoming production of Next To Normal, which had an intriguing approach, featuring several Asian-Canadian actors in key roles. Always a champion for diversity – he tweeted a lot about Domee Shi’s Pixar short Bao, which would go on to win an Oscar – Wayne was very sensitive about the representation of POC in popular media.

In fact, he pointed out to Rachel that she should see Zachary Noah Piser, the Asian-American alternate lead in the Mirvish show Dear Evan Hansen. With typical Wayne wit, he dubbed the show Dear Asian Hansen. We were tentatively going to try to see Piser at this Saturday’s matinee.

Instead, we and so many others will be mourning a friend who died too soon, too suddenly. Words fail.

A funeral for Leung will be held in Ottawa on July 27 at Beechwood Funeral Home. A casual get-together for Wayne’s Toronto friends and colleagues is happening this Sunday (July 21), at the Duke of York Pub (39 Prince Arthur), from 6 to 9 pm. A celebration of Wayne’s life will be held August 1, at the Stirling Room (16 Trinity), from 6 pm until midnight. If you have any photos/videos to share for that celebration, please upload them here. In lieu of flowers, a fund has been set up to collect donations for Rainbow Railroad, one of Wayne’s favourite charities.