Touching historical play gets a gorgeous remount by CanStage 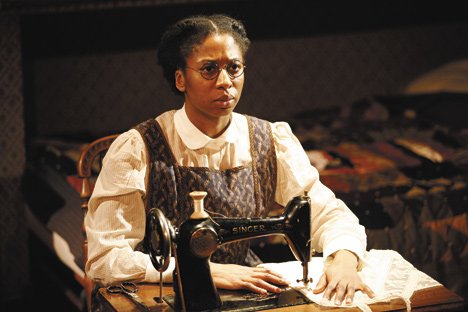 There are many threads in lynn Nottage’s Intimate Apparel, and this remount of Obsidian’s production weaves them into a fine, moving night of theatre that’s a must-see, Black History Month and beyond.[rssbreak]

Esther (Raven Dauda) is a 35-year-old black seamstress in 1905 New York City who supports herself creating undergarments for clients as diverse as Mrs. Van Buren (Carly Street), the tragic lonely wife of a wealthy businessman, and Mayme (Lisa Berry), a black prostitute.

The illiterate Esther’s life changes after she begins a romantic correspondence (aided by the two women) with George (Kevin Hanchard), a labourer on the Panama Canal.

Nottage spends much of the first act establishing the various characters and their place on the social and economic ladder. But this care ensures that each character is sympathetic, laying the groundwork for the more plot-driven second act.

Hanchard adds energy and complexity to George, an archetype we’ve seen many times before. But opposite George, Dauda occasionally overacts for laughs and tears. Street, too, could use a bit more subtlety to capture her neurotic wife.

But these excesses – perhaps a result of moving from the smaller Berkeley Street Theatre to the Bluma Appel – are tiny flaws in an otherwise gorgeous and colourful creation.