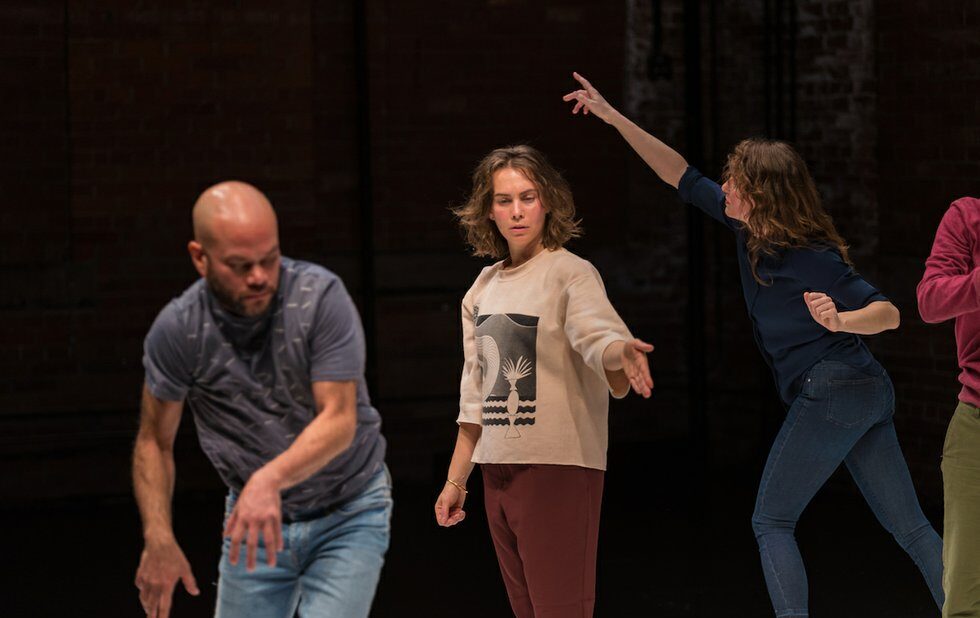 A cliched bit of relationship advice is that successful relationships are about more than birthdays and holidays. Meaningful connections tend to strengthen through everyday repetition: waking up together, making breakfast, listening to the radio, doing nothing.

London, UK-based Canadian writer/director Jordan Tannahills Declarations is a beautiful articulation of why we shouldnt take lifes uneventful moments for granted. Inspired by his mothers terminal cancer diagnosis, the 70-minute piece charts the flow of human memory and turns remembering into a joyful act.

The staging is minimal and the structure experimental: on an illuminated square beneath the looming brickwork of the Berkeley Street Theatre, five performers recite declarations (This is my mothers eyelash, This is a rim job) and then improvise a gesture to express them.

Though an ensemble piece, Liz Peterson emerges as the anchor. She opens the show solo, running through a gamut of declarations describing various body parts, architectural details, objects, emotions and sexual acts in quick succession. Her exaggerated movements both contrast and make comedy of the neutral expression and tone thats part and parcel of this kind of minimalist theatre.

She splays on the floor or outstretches her arms as if striving for something greater. Multiple riffs on the declaration This is feminism turn into a mini-routine that bluntly winks at the shows express the inexpressible conceit.

Those tonal contrasts become a source of subtle humour, and small pauses and hesitations add a low-key sense of stakes that amplify when Jennifer Dahl joins, turning the piece into a duet. Sometimes they recite in sync, sometimes they speak over each other or team up for a comic tableau that sparks laughter in the audience and one or two cracked smiles onstage.

The gestures grow more furtive and repetitive as Philip Nozuka and Danielle Baskerville arrive, then finally Robert Abubo. The emotional arc becomes less about individual experience and more about a collective, with evocations of a mother the constant throughline. Gestures, inflections, words and wordless melodies sung in an almost R&B style by Nozuka, who also composed the music cues overlap until the players finally lock in rhythmic, foot-stomping unison.

The effect is akin to the roving camerawork in recent Terrence Malick movies: intimate details gradually take on immense weight. Peterson brings the fragmented memories together in a short, straightforward and quietly devastating monologue about a forgotten cellphone.

Some things are just best described in words.