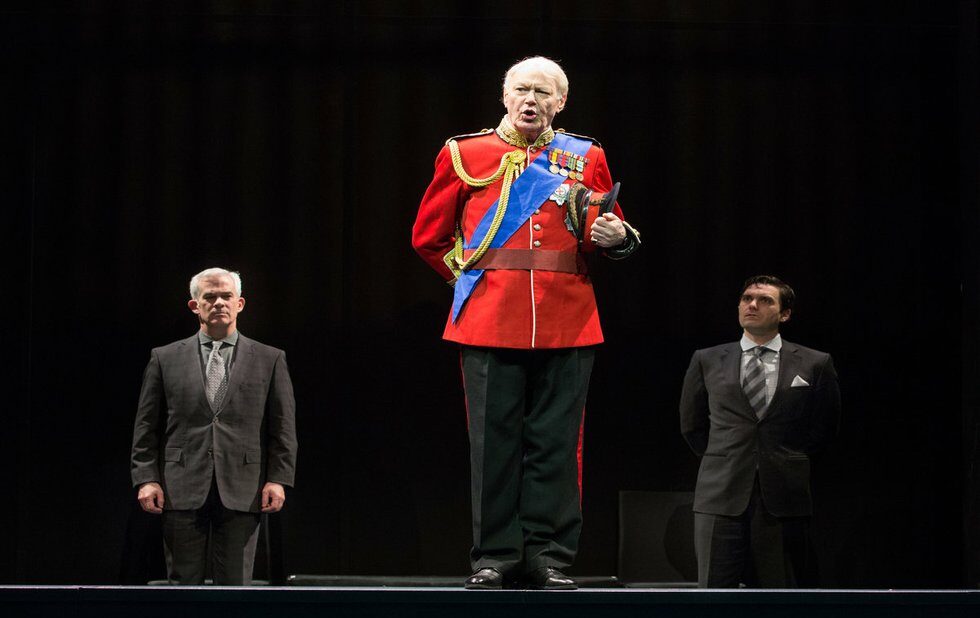 This is true especially in the case of Mike Bartletts King Charles III, which imagines life inside Buckingham Palace and the House of Parliament just after the death of Elizabeth II. The Studio 180 team had to pray that the queen didnt die between the time they were announcing the production and opening night. She has, fortunately, held on (I give her another 10 years, easy).

But Prince Harry (Wade Bogert-OBrien) has changed his tune drastically since the play first opened in the UK. A key plot point hinges on his alienation from the royal household and, thanks to an affair with a commoner, his desire to get out of his princely duties entirely.

But what about Meghan Markle? In a revised version here, there are references to Harrys divorce from a Hollywood celebrity, and so his passion for the unknown, pierced Jess (Jessica Greenberg) makes sense.

Such is the challenge of writing about the worlds best-known family, whose every move is followed by dedicated fans (and haters). Then again, so popular are the royals that a play about them is bound to draw audiences. And this play, written in blank verse to underscore its Shakespearean themes, is a good one.

The action, unfolding on a generic set of risers, opens just after the queens funeral and three months before the coronation of Prince Charles (David Schurmann).

The assumptions of everyone around Charles, including his wife Camilla (Rosemary Dunsmore), his press secretary James Reiss (Guy Bannerman), leader of the opposition Mark Stevens (Patrick Galligan) and, especially, the Prime Minister (Gray Powell, looking weirdly like Justin Trudeau), is that business will go on as usual. The new king will attend to his duties the way his mother had, making them mostly ceremonial.

Instead, Charles refuses to sign a law passed by Parliament that puts restrictions on the press. He stands firm and creates a possibly catastrophic constitutional crisis.

From that point, the political intrigue intensifies, ambitious royals, including Prince William (Jeff Meadows) and his wife, the duchess Kate (Shannon Taylor) begin jockeying for power and the once rock-solid royal household becomes seriously destabilized.

While all of this is fascinating fodder, the production is held back by a venue that puts too much distance between the action and audience. Except for a few speeches in Parliament and the final coronation, this is an intimate play that takes place in one room. The CAA (formerly Panasonic) Theatre makes it hard to connect.

Director Joel Greenberg is creative in trying to solve the problem, especially when he veers towards spectacle in the plays opening and in a scene that pays homage to hacker group Anonymous.

And his cast is solid. Bogert-OBrien is charismatic as Harry it helps that hes almost a dead ringer for the prince and Greenberg has great energy as the interloper Jess. Taylor, as the Duchess of Cambridge, expertly finds the balance between Kates fashionable likability and her edge. Meadows isnt quite as strong, taking milquetoast a bit too far.

But its Schurmann who keeps it all together as the exasperating future king, who just will not behave. You can feel his longing to do something meaningful after having been sadly sidelined for so long. The irony is that in trying to make the monarchy matter, Charles might destroy the country.

Lean in to this piece the venue forces you to and you wont have to be royals-watchers to appreciate this production.