LA BETE by David Hirson (Soulpepper). At the Young Centre for the Performing Arts (50 Tank House). Runs to June. 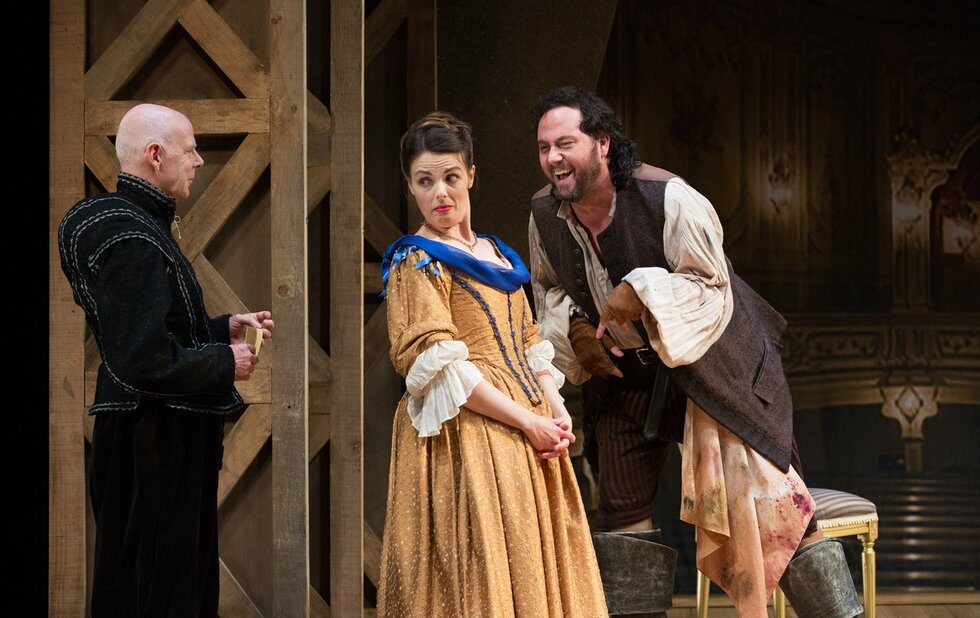 Gregory Prest (right) does the close-talker thing with Sarah Wilson and Oliver Dennis.

When David Hirson wrote this homage to classic French comedy back in 1990, he couldnt have known that in 2018 the U.S. would be held captive by a vain, boorish beast who had basically conned a nation into making him president.

But its hard not to think of Trump while watching Tanja Jacobss sharp production of this comedy, especially when a character says, Our lives are governed by so many foolish men.

Since the speaker is a woman, and Soulpepper is mounting this revival in the wake of the abuse allegations against their former artistic director, you can extrapolate a few other things from that damning statement, too.

That doesnt sit well with the high-minded house playwright Elomire (Sarah Wilson), whose name is an anagram for that eras best-known dramatist, or senior actor Bejart (Oliver Dennis). In the long first act, while Valere delivers his preening, obsequious and flatulent (in more ways than one) exclamations in a justly famous 30-minute monologue, the pairs fallen faces express more than any words could say.

Hirsons play is quite an accomplishment, not least because its written entirely in rhyming couplets. The first act ends in what is essentially a rap battle between Valere and Elomire, and the second act is largely taken up with a farcical recreation of an eye-rolling show.

Some of the laughs, especially in the second act when the courts extended theatrical troupe, who include Raquel Duffy, Paolo Santalucia and Michaela Washburn, tramps onstage, feel forced.

But the bittersweet conclusion takes the play in a fascinating direction, and the central performers handle the language and the comic capering with great skill. The fact that Jacobs has cast Jones and Wilson in roles that are usually played by men adds another edge to this timely production.

Prest, best known as a dramatic actor, is a revelation as the title character, nimble not just vocally but also physically (hes helped by the unflattering makeup and ridiculous rags by designer Shannon Lea Doyle).

The backdrops to Ken MacKenzies elegant set suggest that all the worlds indeed a stage, and John Gzowskis sound design has some nice touches, especially the out-of-tune harpsichord introductions that indicate something very wrong, but probably funny, is about to go down.