LILIES OR, THE REVIVAL OF A ROMANTIC DRAMA by Michel Marc Bouchard (lemonTree Creations/Buddies In Bad Times/Why Not). At Buddies. 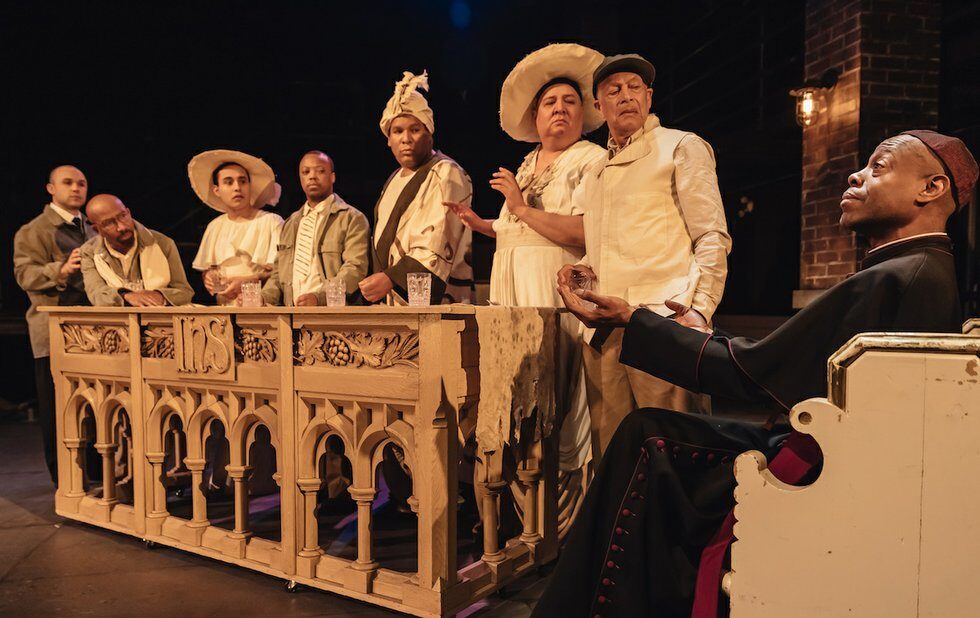 LILIES OR, THE REVIVAL OF A ROMANTIC DRAMA by Michel Marc Bouchard (lemonTree Creations/Buddies In Bad Times/Why Not). At Buddies in Bad Times (12 Alexander). Runs to May 26. $20-$40. buddiesinbadtimes.com. See listing. Rating: NNN

The classic Canadian play Lilies has a lot going on: its a revenge story and a queer romance set in two time periods, and uses a play-within-a-play-within-a-play structure to comment on the power of theatre as an art form.

Director Cole Avis takes Quebecois playwright Michel Marc Bouchards 32-year-old meta-narrative (translated in 1991 by Linda Gaboriau) about Catholic repression even further in this version co-produced by Why Not Theatre and lemonTree to cap off Buddies in Bad Timess 40th anniversary season.

By filling the cast with mostly Black and Indigenous actors, and weaving in Indigenous rituals, the director sharpens the view of the Catholic Church as a force of colonial violence and slyly flips the theatre-as-reckoning structure into a potent metaphor for restorative justice.

Simon Doucet (Walter Borden), a dying inmate in a Quebec prison in 1952 calls Bishop Jean Bilodeau (Alexander Chapman) to hear his confession. But it turns out he has an ulterior motive: to present Bilodeau with a play that dramatizes the events leading up to his wrongful imprisonment in 1912.

As the old men watch, a group of mostly younger inmates performs a torrid romantic drama with props and costumes fashioned from prison objects. In Roberval, Quebec, Simon (Tsholo Khalema) and Bilodeau (Indrit Kasapi) are starring in a homoerotic school play about Saint Sebastian alongside Vallier (Waawaate Fobister). The sexually repressed Bilodeau becomes jealous of his cast mates budding romance and confronts them, triggering events that prompt Simon to turn against Vallier and become engaged to the Parisian baroness Lydie-Anne (Ryan G. Hinds).

All the while, the imperious older Bilodeau grows angrier and antsier, interrupting the performance and provoking the bellicose Simon to shout him back into his seat. Though Borden spends much of the two-hour show watching from the sidelines, the stage veterans volatile presence he also dips into the play-within-a-play to take the role of Simons intolerant father, Timothee sets the tone for a handful of fiery performances that dominate the show.

After setting up the love triangle plot, the play spends a lot of time exploring younger Simon and Valliers relationships with the women in their lives.

The Buddies mainstage is big, and Troy Emery Twigg handily fills it with the most interesting and physically demanding role: Valliers mother, Marie-Laure de Tilly. Accepting of her son, she is the moral heart of the play but also prone to exaggeration, and Twigg fluidly moves between solemnity and camp.

Similarly, Hinds brings a dominating, grand dame gravitas to Lydie-Anne, adding depth and tragedy to an instigating character that could have easily fallen into caricature as Simons beard.

Fobisters Vallier is a nexus point between the romantic, the spiritual and the political. The actor has a captivating presence, but his romantic rapport with Khalema gets lost in the layers of intricate dialogue. Supporting players Kasapi, Mark Cassius and Joseph Zita also struggle to break through in the stacked cast.

Chapman, despite spending most of the show side stage with Borden, is a standout. Though his character has plenty of self-righteous outbursts, his performance is predominately reactive and visual, imparting a tortured inner turmoil with small gestures and glances.

The play builds to the bishops big, revelatory scene, but the show is less interested in what motivates structures of power than their damaging effects. Simon and his mother’s Indigeneity is emphasized through movement, language and music, deepening the stakes and suggesting expansive context and history. But Kasapi’s younger Bilodeau feels like an afterthought, and the lack of heat in the love triangle saps dramatic momentum in the lead-up to the climactic moment.

At times, the spacious set feels underused. However, scenographer Jay Havens finds ways to reinforce the reclamation theme by flipping mundane and churchly objects into sacred and profane ones, a cheeky example of which comes when a church pew morphs into a bathtub that is the site of a sexual encounter. Michelle Ramsay‘s reddish-brown lighting design subtly adds a warm, antique feel.

This version of Lilies is full of intricate layers that dont always coalesce, but it’s electrifying when they do.