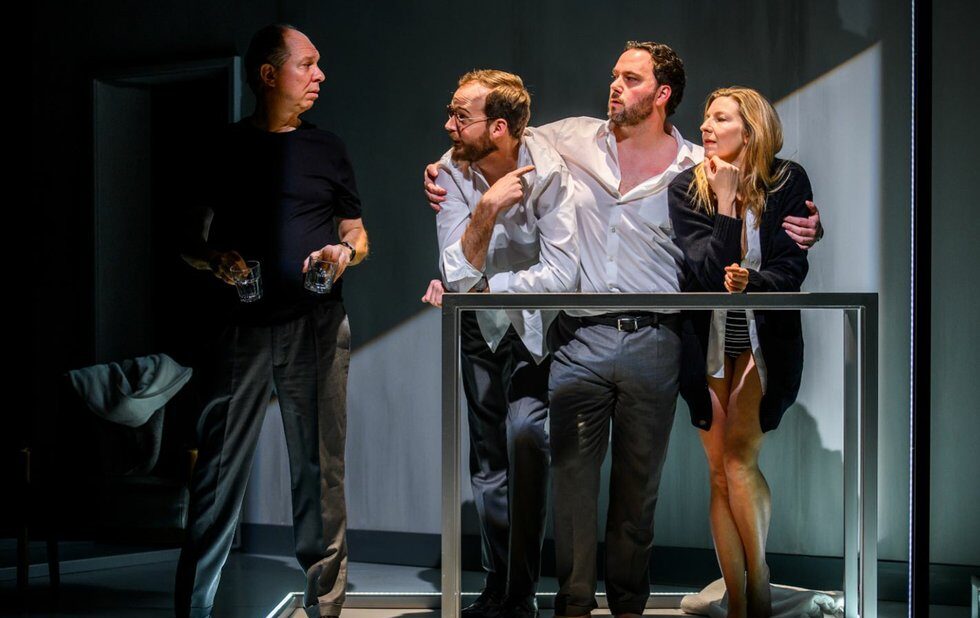 Newspaper sales, sandwich boards, arthritis: in the works of Harold Pinter there is no subject too innocuous to evade being awash with enigmatic peril.

The 10 plays assembled for Little Menace showcase the late English playwright and Nobel laureates weaponization of language in everyday exchanges and special gift for the comedy of unease. Each moment takes a razor to some hidden fold within the psyche, incrementally sapping the characters sense of self-determination.

Helmed by Greek director Thomas Moschopoulos, these Pinter plays are sequenced so as to draw you in with short, sharp shocks of amusingly inane dialogue micro-confrontations that play as antecedents to Seinfeldian high-tension conversations about nothing before subjecting you to more extended bouts of existential vertigo and pent-up violence.

A dispatcher (Diego Matamoros) petitions a disoriented cabbie (Alex McCooeye) to accept a fare in Victoria Station, which crescendos with an invitation laced with homoerotic aggression. In Night, a puppet-master narrator (Matamoros) dictates the moment-by-moment destinies of a pair of old friends (McCooeye, Gregory Prest) whose reunion is undermined by the presence of a seductive third party (Maev Beaty), until the players eventually wrest control of the narrative. In the all-too resonant Press Conference, a smug politician (Matamoros) explains why theres little difference between his former role as head of the secret police and his current role as minister of culture.

Unfolding on a stage comprised of moveable empty frames and slender rods of light that alternately invoke alienating workplaces and residences outfitted with Scandinavian furniture, Little Menace benefits from fluid transitions and an engaging balance of tonal variation and thematic unity. For an anthology, it feels commendably of a piece.

Its limitations, however, manifest in an overused transitional refrain of vacuous greetings and in its dearth of compelling or diverse characters, especially people of colour of which there are none and female characters. Using English accents where pertinent, the ensemble members are uniformly deft in their handling of Pinters challenging cadences and pregnant pauses, yet Beaty feels notably underused in her handful of roles, the largest of which finds her delivering her lines through a caricatured femme-fatale haze.

In Pinter, forces of oppression permeate every aspect of life, insidiously implementing biases toward class, race and gender. I just wonder if the distribution of roles in Little Menace mightnt have transcended such confines.