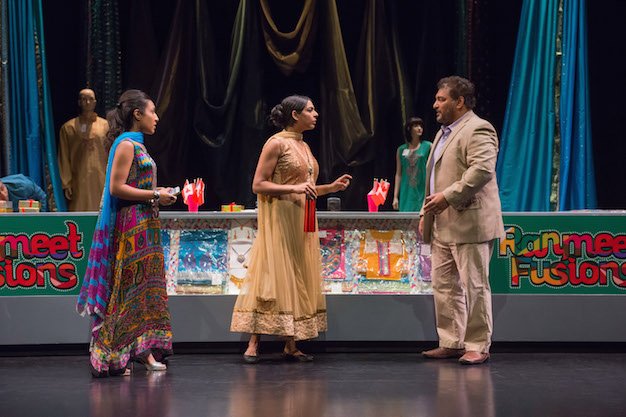 In Anusree Roys Little Pretty And The Exceptional, set in Little Indias Gerrard Street, theres much more to focus on than shimmering, colourful saris.

The Singh family father Dilpreet (Sugith Varughese) and his daughters, Simran (Farah Merani) and her younger sister Jasmeet (Shruti Kothari) about to open a new sari shop, are haunted by a secret they dont discuss.

That secret is suggested early in the play, though, by Simrans twitchy fingers, pulling at her throat and increasing nervousness and anxiety. Part of the stress is her intention, pushed by her father, to be an Osgoode Law School grad. But we soon learn that their deceased mother had trouble sorting out what was real and what wasnt Simran manifests the same condition.

As Jasmeet (the Little Pretty of the title) prepares for her high school prom and helps, with her new boyfriend Iyar (Shelly Antony), to make the shops opening a grand one, Simran (the Exceptional) sinks deeper into a frantic state over her LSAT score.

Holding them together is their demanding father, a sometimes comic new Canadian shopkeeper who wants the best for his kids. Varughese plays the laughs, mostly around Jasmeet and Iyar he considers Iyar too dark a Tamil with teeth that are too white.

When Jasmeet calls him a racist, he responds, how I be racist to my own race?

But early on he also shows his sensitivity to his elder daughter, and his concern grows throughout the play. Roys given him a touching, quietly passionate second act speech, perhaps the best in the play, in which he speaks to his deceased wife and reminds her of their plans for the family.

Antony is ebullient and full of energy, eventually winning over the man he starts to call uncle, and Kothari is a winner as the lively, vibrant Jasmeet, with a great sense of timing. The younger child who seems never to have accepted her parents death except with anger, she relies on Internet information to help her sister, insisting that her fathers attitude toward medical care is wrong.

The stumbling block and the hardest role in this entertaining but sometimes chilling story is that of Simran, who can only sink further and further into depression and violent acts. Theres little nuance available to Merani, even when director Brendan Healy, lighting designer Andre du Toit and sound designer Richard Feren allow us to see into her mind and what shes going through.

The plays final scene takes play on Canada Day, as Dilpreet and family are about to open their new store, full of hope for a new future. Its a very human, open-ended conclusion, with both joy and the sense that things might not go as well as theyd all like.