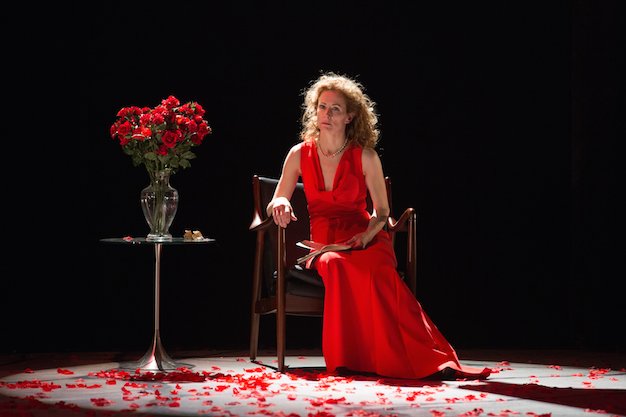 In Nino Haratischwili’s Liv Stein, the personal truths that characters tell themselves and want to believe in aren’t always secure.

The play’s North American premiere, translated by Birgit Schreyer Duarte, is smartly directed by Canadian Stage’s Matthew Jocelyn and gorgeous to look at, but its emotional impact could be stronger.

Renowned concert pianist Liv Stein (Leslie Hope) left behind her career and her passion following the death of her young son Henri, withdrawing into a cold, depressed life of bereavement. When Lore (Sheila Ingabire-Isaro), a young pianist, offers to become her pupil, Liv refuses, until Lore says she knew Henri and will exchange stories about him for lessons.

The temptation works: Lore enters Liv’s life and the pianist returns to the world. This amazes Emil, Liv’s ex-husband (Geraint Wyn Davies), Helene, his second wife (Nicola Correia-Damude) and Simone, Liv’s agent (Caroline Gillis), who’s devoted her life to the pianist. In fact, Lore weaves her way into their lives, seducing each in a different way.

I wish that the script and the staging (Jocelyn regularly calls our attention to the fact that we’re watching a theatrical performance) touched us more there’s a distanced quality to both, despite some moments of passion and hairpin tonal shifts, notably between the Hope’s resonant-voiced Liv (whose journey begins and ends in ice and anger) and Wyn Davies’s Emil, obsessed with sex and youth and always happy to share his thoughts and body with others.

The show’s tone is often that of comic tartness, and both Correia-Damude and Gillis have their moments to entertain with biting dialogue. Ingabire-Isaro is confident from the start, but over the course of the play the mysterious Lore needs more tones and should suggest something other than what she says.

There’s an intriguing subtheme in the script, as the various musicians talk about their favourite and less favourite composers, among them Rachmaninoff, Ravel and Schumann. Their choices and reasons offer insights in the speakers’ personalities, and sound designer Lyon Smith uses some of their piano compositions to echo a scene’s mood as the story transitions from one episode to the next.

Debra Hanson’s elegant set, lit by Michael Walton, floats in a black void, and her costume choices for the title character help underline Liv’s frame of mind. Jocelyn makes striking use of rose petals, first as a triumphant statement and later in a less positive fashion, the show’s last moments offering a visual treat tinged with sadness.