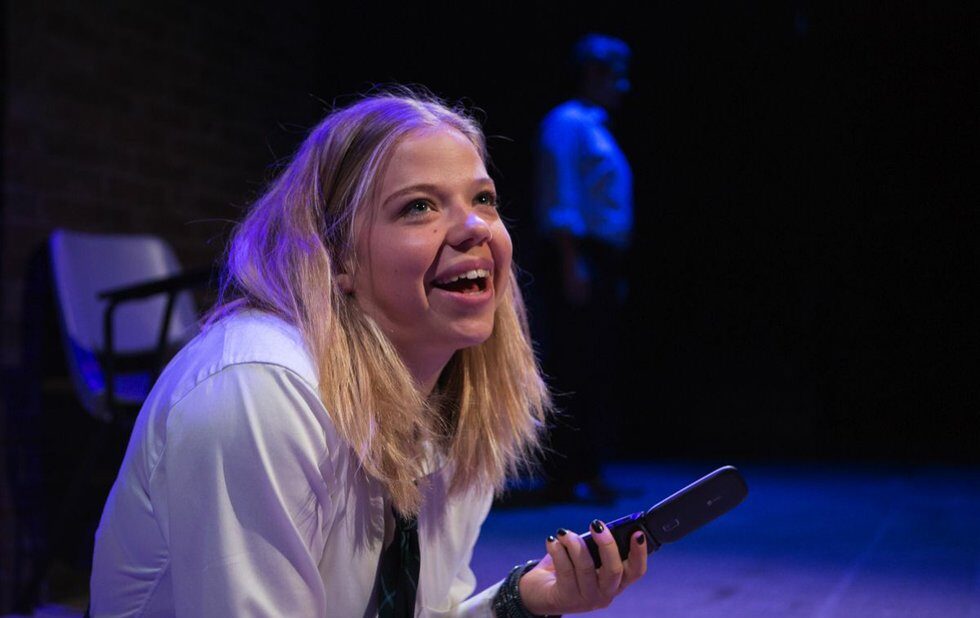 Lo (Or Dear Mr. Wells) is the second and final play in Nightwood Theatres Consent Event, a two-play series which explores the intersection of sexuality and consent.

Playwright Rose Napoli examines these issues through the eyes of Laura (Vivien Endicott-Douglas), a young woman looking back on her underage affair with a high school English teacher whom she calls Mr. Wells (Sam Kalilieh). At 15, Laura is gifted and precocious, and Mr. Wells becomes a surrogate for much of whats missing in her life: a father, a supporter and a friend.

Of course Laura now knows that he was none of those things. Not really. Her retelling repeatedly switches between the Laura of the past and the present, showing us the evolution of her relationship with Mr. Wells whilst commenting on its poisonous downturns.

Napolis tightly crafted script gives us complicated characters that avoid the cliches of predator and prey. Mr. Wells is undoubtedly dangerous but genuinely interested in the prodigious talent of his student, and Laura is far from passive, though still very much a victim of assault. Napoli shows us the conflicted ways in which Laura convinces herself shes still in control, though we know its an illusion.

Despite weighty material, both actors have crafted a potent, emotional relationship. Theyre constantly adjusting themselves in relation to one another, and their finely tuned reactions create a painfully believable journey. Kalilieh shows us the vulnerabilities of a villainous man, and Endicott-Douglas does double-duty as both a girl and the woman she became. Her quick shifts dont rely on any support from lights or sound, but rather the clear choices of an accomplished actor.

Director Andrea Donaldson and assistant director Michelle Langille create a well-defined structure that not only keeps the past and present clear but orchestrates a careful and dynamic progression of thought and emotion. Napolis script is full of evocative language, and its well utilized by everyone involved.

We need more playwrights like Napoli. Shes a real talent with something powerful to say and the ability to communicate it with candour and clarity. As Laura says to Mr. Wells, Fiction is the dramatization of reality.

Lo (Or Dear Mr. Wells) reminds us of the uncomfortable truths we must continue to face.