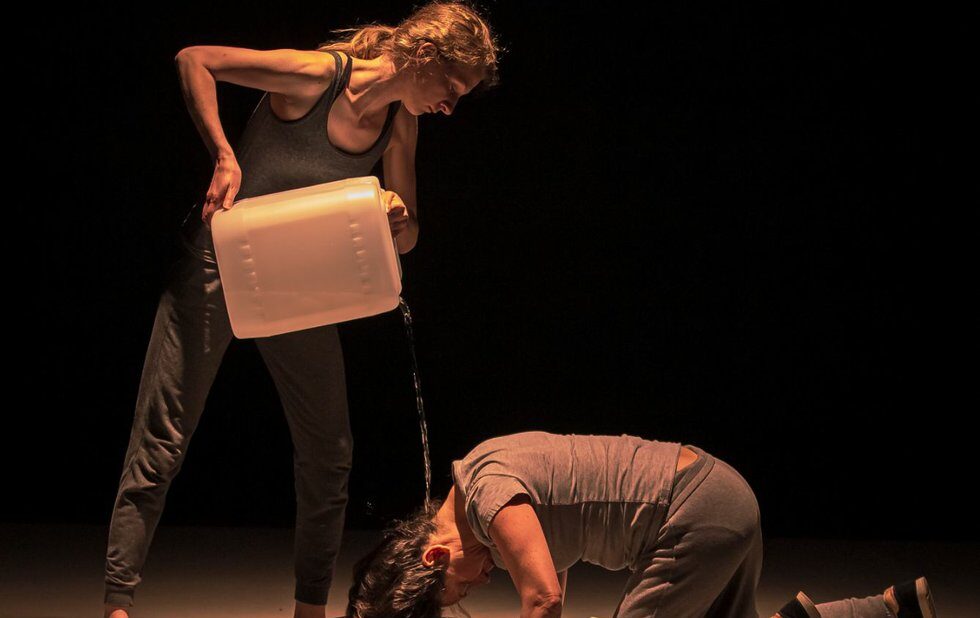 Its nine actors, all wearing grey warm-up gear, slip in and out of character, fuse the languages of theatrical realism and dance, and swap roles as the narrative leaps across swaths of time. For the most part, they manage to keep us oriented, though tracking every development in Fournier’s intricate plot hardly seems essential to the experience: my favourite passage of this ambitious production occurs late in its final third, where character distinctions seem to dissolve almost completely in a woozy whirl of voice and movement.

The story’s anchor is Sarah (Beatriz Pizano), a former madam and caregiver to a quartet of orphans who, as it happens, is hundreds of years old. In the wake of a devastating plague, Sarah and her young charges are forced to move into a quarantine zone, where they encounter a doctor seeking subjects for an experimental drug program. Years pass, yielding alliances, casualties and discoveries.

There’s a massive cathode-ray television showing grainy, monochromatic images of animals and water, radiography and various abstractions. Jennifer Dahl spends an extended period in a spot-lit corner as a sort of apocalyptic go-go dancer embodying the characters’ collective panic. Claudia Moore circulates throughout as a playful child-ghost. The busyness of Amanda Acorn’s ambient choreography and the ensemble’s various activities is counterbalanced by Christopher Ross-Ewart’s mood-enhancing yet unobtrusive sound design and the overall simplicity of Kaitlin Hickey’s scenography, which nonetheless makes room for some dazzling lighting transitions.

Four Sisters’ diversions and beauty never detract from the protestations at its heart. This is a plea against the ghettoization of the poor or otherwise marginalized, against the systematic devaluation of those who aren’t deemed prized contributors to a distinctly patriarchal brand of advanced capitalism.

At nearly two and a half hours, it isn’t short, and there’s a lot going on, but the payoffs are deep and moving.