NOW MagazineCultureTheatreMeasure For Measure is a perfectly built production

Measure For Measure is a perfectly built production 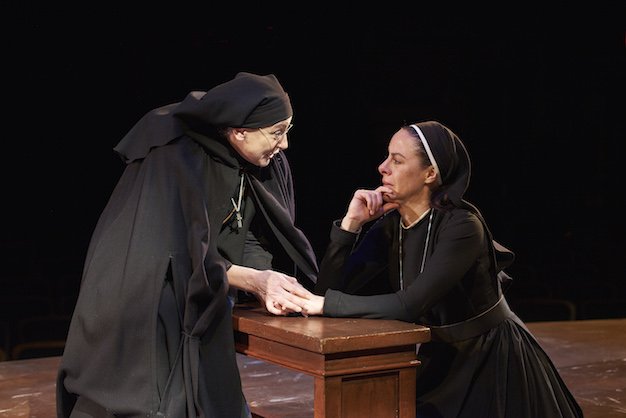 Power, sex and corruption simmer at the core of Measure For Measure, one of Shakespeares most thorny plays.

Groundling Theatres production is one of the best Ive ever seen, not just because the script is fascinating but also because the scope and balance of serious and humorous are so well captured.

The main plot involves the Duchess of Vienna (Lucy Peacock, in a gender-switched version of the original) who leaves her kingdom, giving authority to Angelo (Tom McCamus), her fussy, rule-abiding deputy. She doesnt actually depart but disguises herself as a nun to observe his actions.

The strict Angelo enforces a law whose penalty demands the beheading of Claudio (Charlie Gallant) for getting his betrothed, Juliet (Sarena Parmar), pregnant before they are legally married.

When Isabella (Michelle Giroux), a novice soon to become a nun, comes to beg for her brother Claudios life, she arouses Angelos lust he offers her Claudios freedom in exchange for her virginity.

The related plot involves Angelos attempt to rid the city of brothels Mistress Overdone (Karen Robinson) and Pompey (Steven Sutcliffe), her pimp, are central to these often comic scenes.

Director Graham Abbeys impeccable staging, designed and lit by Steve Lucas, has the audience sitting on the Winter Garden Theatre stage, looking at the action on the stages edge, with a view of the auditorium beyond. The storytelling, intimate, specific, warm and crystal clear, opens up the text, making us privy to private moments, silent tears and belligerent sneers that would barely read on a larger stage.

The cast is just as impressive.

Shakespeare doesnt always give the Duchess solid motives for her actions, and Peacock takes her cue from the script, subtly suggesting that the Duchess is troubled before she speaks her first words. Theres an air of mystery about her, despite her strongly felt and acted-upon desires to right wrongs in her kingdom.

In this contemporary-dress version (by Jenna McCutchen), McCamus looks like a bean-counting drone, severe, cold and low-key until he flashes an uncomfortable smile at the audience. Watch the way his breathing and expressions change as he becomes infatuated and tries to manipulate Isabella.

Giroux is mesmerizing, first shocked by what shes asked to do and later unable to control her anger with Angelo the physicality between the two characters and the shifting space between them are revelatory as their words.

That anger doesnt abate. Its later directed at Claudio and a world that seems to have abandoned all thats virtuous and just.

Gallants Claudio has a largely innocent charm, as does Parmars Juliet. As Claudios slippery friend Lucio, Brent Carver understands how to insult and beguile at the same time, while Patrick Galligan does a neat 180 playing first Escalus, Angelos more human second in command, and then the haughty executioner Abhorson, in the employ of the jails provost, given sympathetic strength by Roy Lewis.

Its the comic subplot thats revelatory here. Because the main story is so strong, I often wish these scenes to be cut even more than they usually are. But Abbey gives the comedy its just weight, and it couldnt be more powerfully entertaining.

Robinson makes a blowsy Overdone, compellingly emotional she contrasts the character with a sober prioress and a heartfelt Mariana, who was formerly engaged to Angelo. Sutcliffes Pompey is recognizably human: angry, stubborn, snide and at odds with authority…until his own life is forfeit. The comic gem, though, is Mark Crawfords Elbow, a language-muddling constable played to perfection. The actor later makes intimidating use of his considerable size as a drunken prisoner.

Measure runs in rep with The Winters Tale, which Groundling first presented at the Coal Mine last season both shows feature music composed and performed by George Meanwell, who also plays a role in each. I havent yet seen the remount, but with the auditorium vista of leaves, lanterns and trees, I think it will be even more impressive than that fine initial production.