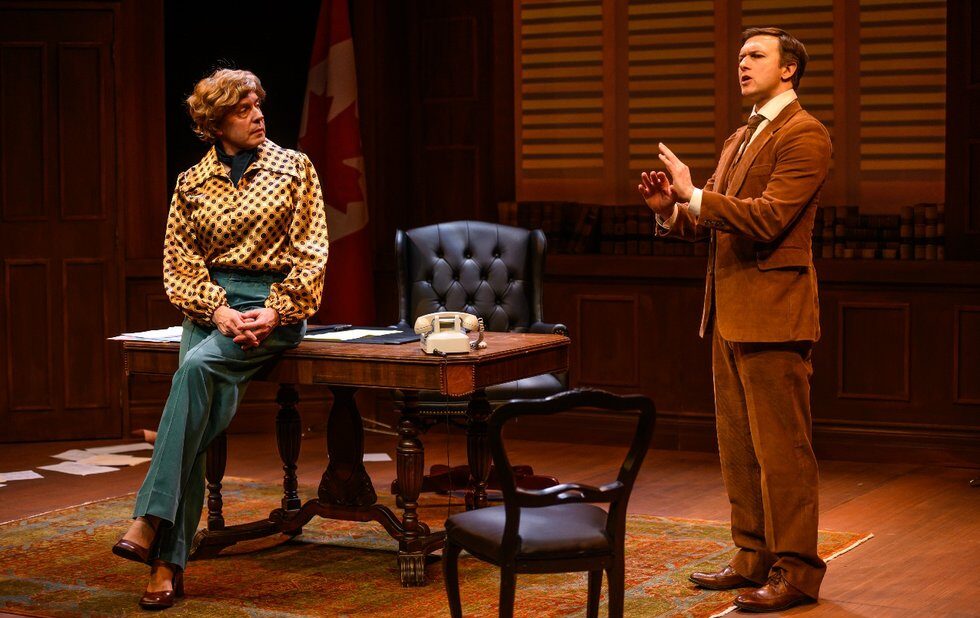 Its the day Parliament is voting on Prime Minister Joe Clarks first budget. But hes leading a Progressive Conservative (now defunct federally) minority government and doesnt have enough support. The NDP, angry with his proposed 18 per cent gas tax, is ready to vote with the Liberals.

As Clark ponders his inevitable failure, he is visited by an array political players, who propose sleazy compromises. But Clark, too decent for his own political good, will have none of it.

The play boils down to a series of dialogues between Clark (Philip Riccio) and his colleagues, adversaries and wife, Maureen McTeer. The ancillary characters are portrayed by Christopher Hunt and Jamie Konchak in multiple roles both male and female all hail wig master Nati Atuan. Text projections identify them and insert sly tidbits of information for those who either cant remember or are too young to know the details.

Directed by Miles Potter, the players turn on a dime. Konchak delivers the smugness of aspiring power broker and bitter loser Brian Mulroney (Clark defeated him in the leadership race) with aplomb. As McTeer, shes a compelling personality who might herself have made a great politician had she not so totally loathed the atmosphere on Parliament Hill.

Hunt storms in as finance minister John Crosbie, with an expletive-laced rant, furious that Clark seems so calm in the face of defeat. As Flora MacDonald, he occasionally seems too conscious that hes in drag. But he triumphs as leader of the opposition, Pierre Trudeau, a preening opportunist who takes pleasure in tormenting the prime minister. Key to the performance is Hunts uncanny replication of Trudeaus vocal cadence and tone.

Healey could have had a field day portraying Clark as a hopeless, naive doofus with a terminal lack of charisma, but, although he blends into the wood-panelled scenery in his brown corduroy suit, his Prime Minister has a passion for rock music, saves the day when it comes to the Iran hostages and actually possesses an element of charm. This is no nerd he has enthusiastic sex with McTeer on his office desk.

Riccio fully inhabits the character, complete with body language and Clarks signature tilt of the head.

The plays conversations are imagined, but based on factual politics of which Healey is a keen observer. He also revels in satire and the piece is often hilarious. Where he misses is in his portrait of a young Stephen Harper who, as a parliamentary aid, becomes a ferocious interlocutor with the prime minister. Harper may be feral, but he was never ferocious, opting for a steely focus and the quick dismissal instead. Hes a cold fish and theres way too much heat here.

And I wish Healey had acknowledged that Clark defeated MacDonald at the leadership convention in which she received far fewer votes than she was promised. If youre going to write a takedown of political life and its core value of deceit, you cant leave that out.

But this is a highly entertaining night at the theatre not for political junkies only.