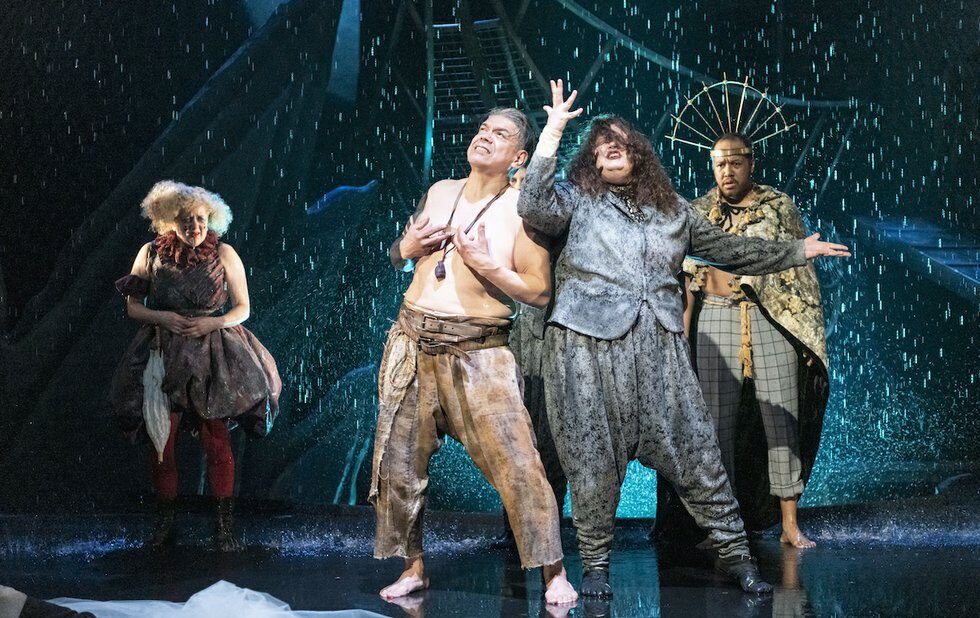 Toronto theatre venues are making strides for accessibility, featuring more productions with American Sign Language-interpreted performances for the Deaf community and introducing relaxed performances for people who are comfortable in a more casual environment (including those with an Autism Spectrum condition or learning disabilities). Both types of performances were regular features at the recent Fringe Festival.

But Mirvish, the biggest entity on the theatre scene, seems to be rolling back on accessibility. Members of Torontos Deaf community are complaining that the theatre company is no longer offering ASL-interpreted performances, directing audiences to select performances with open captioning instead.

Ive had a number of different Deaf people contact me, says Sage Lovell, a Deaf performer and activist. Theyve contacted Mirvish looking for an interpreter, but theres either no response or theyll just say we provide open captions and thats it.

Open captioning means having an LED monitor near the stage, subtitling dialogue and lyrics, much like when you turn on the captions on your television. This is what the Deaf community has to settle for at the movies. Lovell, speaking to NOW through ASL interpreter Rogue Benjamin, argues that open-captioning is a poor substitute for ASL-interpreted performances, which relays whats on stage in the Deaf communitys native language.

Words are only 30 per cent of the meaning, says Ryan Kraft, an ASL interpreter and avid theatre fan. Most people dont say what they actually mean.

Kraft gives me an example, reciting the word happy with different inflections, to the point where he sounds quite angry. A Deaf person reading h-a-p-p-y wont pick up the inflection that an ASL interpreter can add in to their performance.

Lovell also reached out to Mirvish last month. Through their company Deaf Spectrum, they want to coordinate accessibility plans in advance for next years Harry Potter And The Cursed Child run, but has yet to hear back.

Mirvish has provided ASL-interpreted performances in the past for Wicked, The Lion King, The Wizard Of Oz and The Sound Of Music. Such designated performances would feature an ASL interpreter to the far right or far left of the stage. Deaf audiences would be seated so they can see both the interpreter and the performers. But the last time Mirvish provided the service seemed to be in December 2015 for Kinky Boots. That performance was added due to popular demand.

A list of questions NOW sent to Mirvish about ASL-interpreted performances was not answered. Instead, the companys director of sales and marketing, John Karastamatis, directed us to designated open-caption performances, a format the companys website describes as enjoyable for both hearing and Deaf audiences.

We attempt to have them as often as possible, writes Karastamatis, referring to open-captioning performances. However, sometimes the runs are short and there isnt time to create and rehearse an open-caption performance for every title. When we can, we also provide lower-priced tickets to these performances.

Karastamatis also points out Mirvish recently hosted a relaxed performance for Come From Away, which is where audience members sensitive to light or sound dont have to worry about sudden effects, and can move around comfortably and make noise if they need to.

Ryan Kraft has been inquiring with Mirvish about ASL-interpreted performances for Come From Away since May 2017. Kraft is a superfan of the 9/11 tale about Canadians in Newfoundland who assisted stranded airline travellers. Hes seen various productions of the show 23 times and even visited Gander to meet the people who inspired the characters.

Kraft sent his initial inquiry as soon as tickets for the run beginning in 2018 went on sale. He received an immediate response that such a performance had yet to be scheduled. A year later, in April 2018, Kraft asked again about ASL performances.

Ive seen the Toronto production eight times so far, wrote Kraft, and would appreciate the opportunity to share the experience with my Deaf friends whose first language is ASL. Are you planning on making Come From Away accessible in that format? I feel strongly that all Canadians and, really, all the planet should be able to enjoy and celebrate this part of our history.

Mirvishs group sales responded: Yes, it is true that we have a few open-captioned performances scheduled for Come From Away, as we have found that these events have a wider appeal over the ASL variety.

Arguably Canadas most successful musical, Come From Away has either had or is scheduled to provide ASL-interpreted performances in Ottawa Denver Greenbill, South Carolina, and Rochester. But the local Deaf community wont have that experience for a production that, according to Mirvishs website, is about uncommon generosity.

Lovell started a petition on Change.org after hopeful theatregoers Lacey Denis and her girlfriend requested a personal ASL interpreter from Mirvish because they could not make it to the open-captioned performances for The Lion King.

If you choose to bring an interpreter along with you the only recommendation from our side would be to opt for a date that has box seating available for both your friend as well as for the interpreter as this would be the best-suited scenario to ensure that your friend can benefit from the signing experience with minimum distractions to the rest of the patrons in the house.

Asked whether hearing audiences have complained about ASL interpreters being distracting, Mirvishs Karastamatis replied that people complain about everything.

They complain about the people sitting beside them, he writes, the other persons personal odour, weight, height, the tempo of their breathing, the sound of their laugh, what they are wearing, the way their hair is cut and styled, etc.

Karastamatis goes on to cite complaints about sirens heard from outside, medical emergencies during a show, wheelchairs blocking views and audience members who dont have full control of their movements.

We live in an age where people seem to be completely self-focused and entitled, Karastamatis continues, wondering whether home entertainment has made audiences less amenable to communal space. Above all, theatre is about being with other people. I think people have forgotten this and expect the theatre to be the same as their living room.

And yet, there are other people who are generous and open and are appreciative of another community having access to a theatrical experience. They write in with praise and thanks.

I was in love with theatre growing up but it was never accessible to me, says Lovell. I would sit in the theatre and I would have to be given a printed script. I would literally have to sit there and read the print on paper and miss so much of the meat of the show.

If youre making art accessible, just setting up a ramp is not good enough, adds Benjamin.

She explains the ways theatres can incorporate ASL interpretation. They can hire someone like her, who would prepare extensively alongside the production in order to deliver a performance in ASL alongside the actors on stage. Or they can go for real authenticity by hiring someone like Lovell, an actual Deaf person, to perform.

For the latter scenario, an ASL interpreter like Benjamin would sit in the audience, observing whats on stage and sending cues to the Deaf interpreter.

They put out the actual interpretation for the audience who is Deaf to enjoy, says Benjamin. The bonus of having a Deaf interpreter is that they know the language. Its much more eloquent and much more in depth. It also caters to a wide range of language users.

Some shows, like Cannibal at Next Stage, had more than one ASL interpreter to perform multiple roles. In Edmonton, Lovell performed in The Citadel Theatres production of The Tempest. Canadian Stage and Why Not Theatres recent Prince Hamlet production integrated both Deaf and hearing actors on stage for the entire run.

We had a minimum of 400 people coming every night, says Lovell. I dont understand why Mirvish would think that having an interpreter would be distracting for the audience, when obviously it could be very lucrative to have that kind of performance.

ASL Interpretation has been available on Broadway since 1980, for shows from Phantom Of The Opera to Spamalot. Kraft has seen Broadway productions that went beyond just translating, instead developing interplay between the ASL interpreters and the cast on stage, figuring out how to guide the Deaf audiences gaze and create unique moments just for them.

For Shrek: The Musical, the interpreters sped up their translations and then paused so that they could throw to the stage.

Someone on stage spelled L-O-V-E in ASL and the Deaf crowd went wild.

Providing ASL-interpreted performances is not a simple task. You dont just hire an interpreter to simply translate what they see and hear on the spot. Producer Derrick Chua learned that when setting up ASL interpretation for Boy Falls From The Sky at the recent Fringe Festival.

Ive seen some shows with ASL interpreters, says Chua. I just thought, Thats easy. They just get a script and they do it. But I had no idea the amount of work it takes for them to interpret the script into ASL.

In reality, interpreters dont just analyze and memorize the script but also take part in rehearsals, measuring every beat and nuance from the production. For Boy Falls From The Sky: Jake Epstein Live At Supermarket, they also hired a native Deaf speaker to interpret the song lyrics, because the words werent necessarily literal and had to be treated differently.

For a one-hour solo show like Boy Falls From The Sky, an ASL interpreter costs about $800-$1,000 for the prep work and $125 per performance. Thats a heavily discounted rate considering the relatively simple production and economics of a Fringe solo show. A single show in a 100-seat venue only brings in about $1,300 in gross revenue. The costs go up from there for longer and bigger shows with more characters and complexities.

I would love to be able to do more, says Chua, suggesting he would also explore guides for the visually impaired and perhaps even relaxed performances.

Carlyn Rhamey won the Accessibility Award at Fringe for her solo show The ADHD Project, a relaxed performance.

In this stage in my career, Im okay with people coming in late or making noise or moving around, if thats what they need, says Rhamey. It doesnt disrupt me. The more people you can open your doors to the better. Especially with this show. Its all about embracing your differences and being proud of who you are. We didnt want to block that story out for anybody. We wanted every show to be open.

Rhamey didnt have ASL-interpreted performances at Fringe. The festival provides financial assistance for productions that will provide the service.

But if you have ADHD, like me, youre not as great with deadlines, explains Rhamey. Shes actively seeking out ASL interpreters for her tour across the country and more. Were actually planning on doing a run-of-the-show with multiple ASL-interpreted performances in the fall.

It does cost money to do this, says Chua. When youre at this level theres not much to go around. Its tough. But we believe in it. And we want to make it happen.