MUCH ADO ABOUT NOTHING by William Shakespeare (Canadian Stage). At the High Park Amphitheatre. Runs to September 1. Pwyc (premium. 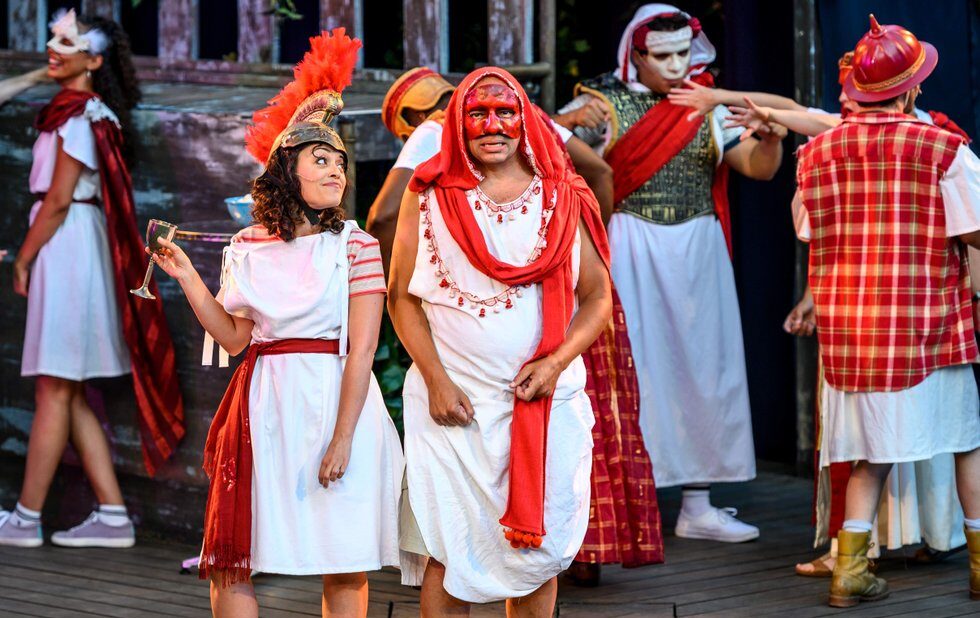 Shakespeares master class in meddling proves itself to be infinitely malleable in Canadian Stages new Shakespeare in High Park production.

Directed by Liza Balkan, this boisterous Much Ado About Nothing unfolds in Ontario cottage country in the late 1990s, and intermittently renders the cheerfully cynical anti-lovers Beatrice (Rose Napoli) and Benedick (Jamie Robinson) as dueling stand-up comics.

This latter gambit is effective in helping a broad audience settle in for 90-plus minutes of Elizabethan English, with Napoli in particular making seamless shifts between the Bards text and contemporary patter and crowd work.

The former conceit, however, is more puzzling. While references to dial-up internet and not one, but two stagings of La Macarena might tickle a certain demographics nostalgic sweet spot, Im not entirely certain what is gained in transposing this tale to the 90s instead of, say, the present. Its at least arguable that digital-age young adults are far more love-phobic and unnerved by intimacy, while the heightened attention to manipulation post-#MeToo would surely inject some fruitful tension into the proceedings.

As for conveying the nuances of Shakespeares humour, Balkans production could have placed more faith in the text. The dominant performance style pushes the actors to speak LOUDER and SLOWER and make extremely exaggerated facial expressions to ensure we GET THE JOKES. The result is that the jokes are sometimes murdered in the process.

Nevertheless, there are standouts in the cast. Nora McLellan is accessible and hilarious as park ranger Dogberry, who turns out to be the hero of the story. Helen Taylor elegantly dispatches complicated exposition as Ursula. And Allan Louis gives tremendous dimension to Leonato. Hes so charming in the plays first half, endearingly delighted to marry off his beloved daughter Hero (Emma Ferreira) to Claudio (Emilio Vieira), that its all the more shocking later when he sides with Claudio and the rest of the men who unjustly slander Hero. Louiss accomplishment is to convince us that the charmer and the scoundrel are precisely the same man.

Uneven though this production may be, its impressive how clearly Shakespeares wit and wisdom come through. In Much Ado, indifference is merely fear in disguise, and it isnt that Beatrice and Benedick fear love so much as having their love unreciprocated.