My Granny The Goldfish 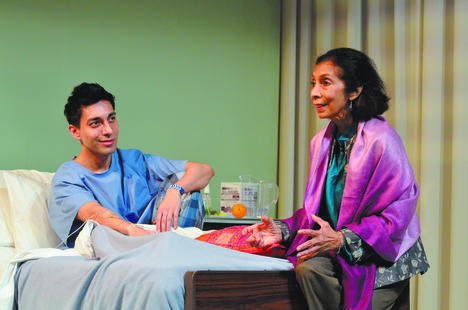 Laughter may indeed be good medicine, but the comedy in Anosh Irani’s My Granny The Goldfish needs to be heartier.

Two years before the play’s action, the hypochondriacal Nico (Kawa Ada) left his family in Bombay to study in Canada. Now, recuperating from an operation in a Vancouver hospital, he’s visited by his Granny (Yolande Bavan), packing a whiskey-filled flask and spouting a combination of sage advice and idiosyncratic, raunchy anecdotes.

Back in India, his alcoholic parents (Veena Sood and Sanjay Talwar) worry about him and argue about their relationship until they’re forced to visit Canada because of an alarming report from Granny.

Irani establishes the tone of his play in Nico’s opening monologue, as much self-deprecating stand-up routine as character exposition. There’s nothing wrong with tackling family problems with comedy, but the narrative needs a stronger drive and structure to allow the laughs a useful function – to dissipate the stress besetting this dysfunctional group’s three generations.

Unfortunately, the rhythms of the first act are lax it’s not until the second that director Rosemary Dunsmore’s production comes together, confrontations have the proper tension and the actors do what they can with – and sometimes improve on – the material.

In that latter half, there’s real warmth and affection between Ada and Bavan as their characters open up to each other, even with the sarcastic zingers that Granny unexpectedly lets fly. Talwar’s sure comic timing gives a kick to some of the father’s speeches even when the humour in the writing is lame.

John Thompson’s high, pointed set and lighting allow the Factory stage to present action in Canada and India side by side, while Reza Jacobs’s sound design also conjures up both worlds. The designers suggest the travelling circus that passes through Nico’s childhood world the circus is a fantasy realm that, sadly, he never gets to visit.

Too bad the rest of the writing, even the story’s resolution, isn’t as powerful or well integrated into the action as that dreamy, potentially redemptive circus.