MY MOTHERS LESBIAN JEWISH WICCAN WEDDING by David Hein and Irene Sankoff, directed by Andrew Lamb (Mirvish). At the Panasonic. 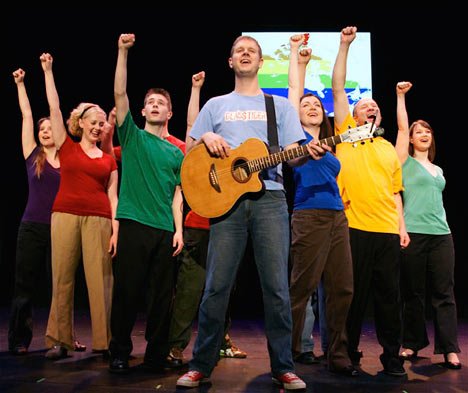 Thankfully, the inevitable loss of intimacy – some jokes fall flat this time – is more than made up for by the show’s spirit and the addition of a few songs.

It’s the story of co-writer David Hein‘s mother, Claire’s (Lisa Horner), late-in-life coming out. After moving from the Prairies to Ottawa to teach psychology, she meets Jane (Rosemary Doyle) in a women’s chorus, and during a cleverly staged sequence set in the nation’s capital, the two fall in love.

Meanwhile, Claire wants to tell her son David (Kyle Orzech as young David, Hein as himself later on), who’s still out west with his dad (Robert B. Kennedy), and there’s Claire’s depressed cat-loving roommate (co-writer Irene Sankoff) to deal with, too.

Hein’s songs range from novelty items like You Don’t Need A Penis to the folksong-inflected 10,000 Feet, which is all about change and moving on.

There’s a sameness to much of the music, but it’s unpretentious and frequently stirring.

Horner again brings a spiky tenacity and spirit to Claire, while Doyle adds a grounded presence as Jane, and casting Lori Nancy Kalamanski as David’s girlfriend was a good call.

Director Andrew Lamb makes fine use of a chorus, and a multimedia short history of queer rights in Canada continues to be a showstopper.

Of course, much of the show’s power comes from the autobiographical nature of the material and its timely discussion of same-sex marriage rights. I’m curious to see what the team come out with next.