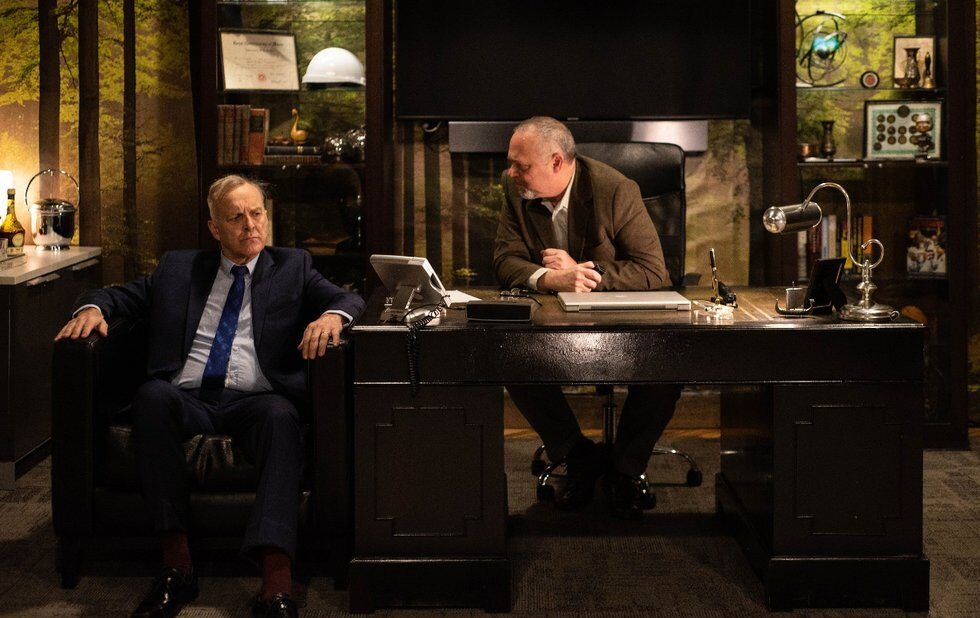 If you’ve ever wondered what it’s like to be a fly on the wall at a Fort Mac oil exec’s office, Convergence Theatre‘s site-specific Athabasca will satisfy that curiosity, as well as provide a nail-biting, clock-ticking drama about one of the most urgent issues of our time.

About-to-retire oil company marketing VP Tom (David S. Craig) has granted an interview to Outdoorsman magazine journalist Max (Richard Greenblatt). Both men have big secrets Tom is unhappy with the circumstances of his departure, while Max is interested in way more than Tom’s love of the outdoors.

The script penned by the actors is clever in how it imparts information about the two, especially during Max’s formal interview questions. Tom, ever the PR pro, is completely prepared he even has a photo of himself with scientist David Suzuki ready to show off. His canned replies about big oil’s connection to the environment are truly terrifying.

It would have been nice to know a bit more about Max, however. I can’t believe that Tom, or his (unseen) assistant, wouldn’t have done some digging about Max’s journalism, if only to help break the ice. And after a while you can see where the plot is heading.

The triumph of director Aaron Willis‘s production is in the performances and in the presentation. Anahita Dehbonehie‘s set from the art on the walls and the books on display to the high tech phone system feels eerily authentic. So do Richard Lee‘s sound design and Jennifer Lennon‘s lighting. There’s stuff to see even before we get to the show proper, with a promotional video playing in the lobby and propagandistic illustrations lining the hallway.

What a treat to see two veteran actors rip into their parts. With his watchful eyes, Greenblatt suggests lots going on beneath his shaggy exterior, while Craig, his posture and patronizing voice oozing alpha entitlement, presents a man who sold out his principles long ago.

The production sold out its entire run shortly after the play opened, but it’s worth trying to get on a waitlist to see this explosive show.