NOW MagazineCultureTheatreHitch yourself to North By Northwest

Hitch yourself to North By Northwest

NORTH BY NORTHWEST adapted by Carolyn Burns from the Alfred Hitchcock movie (Mirvish/Theatre Royal Bath). At the Royal Alexandra (260. 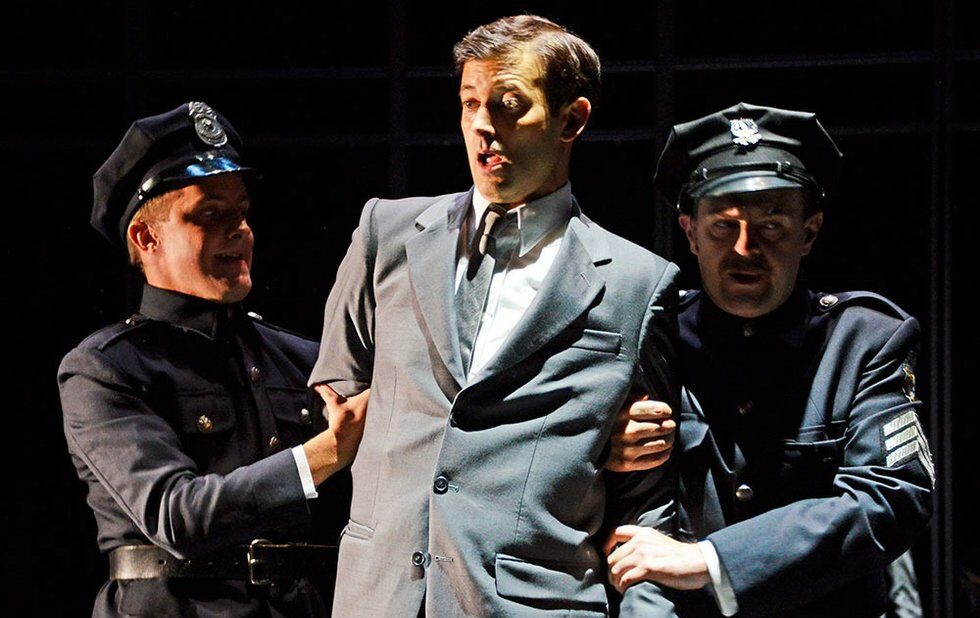 Lets face it. More people watch moving pictures on big, medium and even hand-held screens than go to live theatre. So if you cant beat em, join em, right?

That seems to be the spirit behind Theatre Royal Baths ingenious adaptation of Alfred Hitchcocks 1959 classic, North By Northwest. Its essentially a recreation of the stylish thriller, but with filmic devices that add to the live fun.

Roger Thornhill (Jonathan Watton, looking more like Hitchcock regular Jimmy Stewart than NXNWs Cary Grant) is a slick Manhattan ad exec who, due to a case of mistaken identity, gets caught up in an international plot involving spies, a mysterious bit of microfilm (a classic example of a McGuffin) and an archetypal Hitchcock icy blonde named Eve (Olivia Fines).

Scenes in trains, planes and automobiles follow (not exactly in that order), climaxing in that justly famous sequence set on Mount Rushmore.

The big draw for the show isnt the plot but in how director Simon Phillips and the designers (sets by Phillips, Nick Schlieper, audio visual by Josh Burns) solve certain visual problems.

Borrowing perhaps from techniques by the Belgian duo of Michele Anne De Mey and Jaco Van Dormael (Kiss & Cry) and our own Robert Lepage, the team employs small cameras on either side of the stage to capture and project onto a screen everything from letters characters are reading to trees and mountains whizzing by passengers on a train.

I wont give away how the company pulls off the films two big set pieces including the iconic crop-dusting sequence but lets just say theres lots of playful imagination at work.

Theres also lots of fun in seeing how the scripts sexual innuendos everything from the obvious closeted nature of a henchman to Eves flirtatious banter play out with a contemporary audience.

Its all done without winking too knowingly at us. Canadian Watton and the hard-working ensemble (most of whom are Brits playing Americans very convincingly), buoyed along by Bernard Herrmanns original score and an intriguing soundscape by Ian McDonald, make you appreciate Hitchcocks genius all over again, but this time in a different, more immediate way.