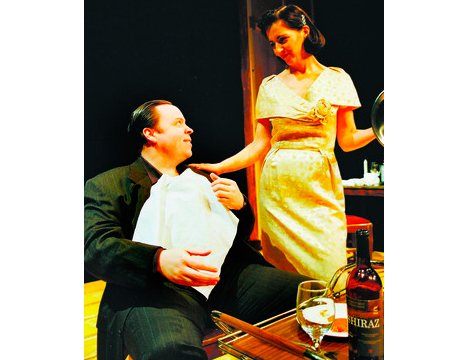 Orson’s Shadow takes a footnote in theatre history and creates a moving look at ego, art and mortality.[rssbreak]

Austin Pendleton’s script sets up the clash-of-the-creative-titans scenario well, and theatre lovers will relish each bit of backstage trivia. Too bad Tynan, who initially acts as narrator, never comes into focus – no fault of Stanton’s performance.

Rona Waddington gets strong work from most of the cast. Ross’s Welles is authoritative and megalomaniacal, his voice and physicality convincing without slipping into caricature. Scott’s somewhat too-young-looking Leigh is high-strung and delicate (the actor nails one scene that’s awkwardly staged), while Porter grounds the production with her character’s humility and tact.

The one disappointment is Eves, who suggests Olivier’s charisma but whose blustery and cantankerous line readings become monotonous. More shading would help.

Still, this is a fine production. The play’s final moments work best, when Pendleton’s bittersweet themes of unfulfilled promise, forgiveness and the redemptive power of art come together.