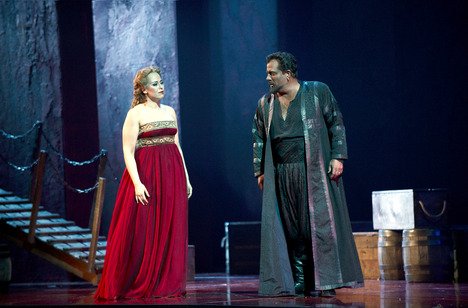 The stars have aligned for the COC’s new production of Otello. It’s as definitive a production of Verdi’s late masterpiece as we’re likely to see in a while.[rssbreak]

That’s not easily accomplished. The composer’s 1887 adaptation of the Shakespeare tragedy requires at least three excellent singing actors, including the one taking on the title role, considered one of the toughest in the repertoire. Also, those hummable stand-alone arias from Verdi’s earlier works are replaced here by a more continuous stream of music drama.

You need a confident director to realize the work’s power, and Paul Curran succeeds, from the thrilling opening scene onwards. Look at how he and set/costume designer Paul Edwards use vertical space (thanks to a couple of strategic boxes) in the first act to help set up the various strands of the complicated plot about jealousy and ambition.

Edwards’s stark set suggests a crumbling empire, and Curran lets his singers navigate its nooks and crannies to exploit the themes of spying and eavesdropping. The chorus, under Sandra Horst, is always used for a dramatic end, not just a musical one.

Baritone Scott Hendricks’s Iago dominates this production, carrying out his Machiavellian machinations with the demonic glee of a death metal rocker, stopping just short of giving us the devil horns sign while planting his insinuations and celebrating his victories.

His is the most effective performance, but Tiziana Caruso’s Desdemona and Clifton Forbis’s Otello are both fine, too. Caruso’s ample voice lacks sweetness, but it’s womanly, and it matches Curran’s conception of her character she’s no pushover. Her final-act Willow Song is a master class in dramatic singing.

Forbis’s powerful voice is heroic if a bit unruly, and he cuts an imposing figure onstage, making his fall from grace – from respected Venetian warrior to frothing-at-the-mouth domestic abuser – pitiable and tragic.

Conductor Paolo Olmi brings out all the dark, rich textures of the score, which fills up the Four Seasons hall with lots of foreboding.

Don’t miss it, or you’ll be courting the green-eyed monster.