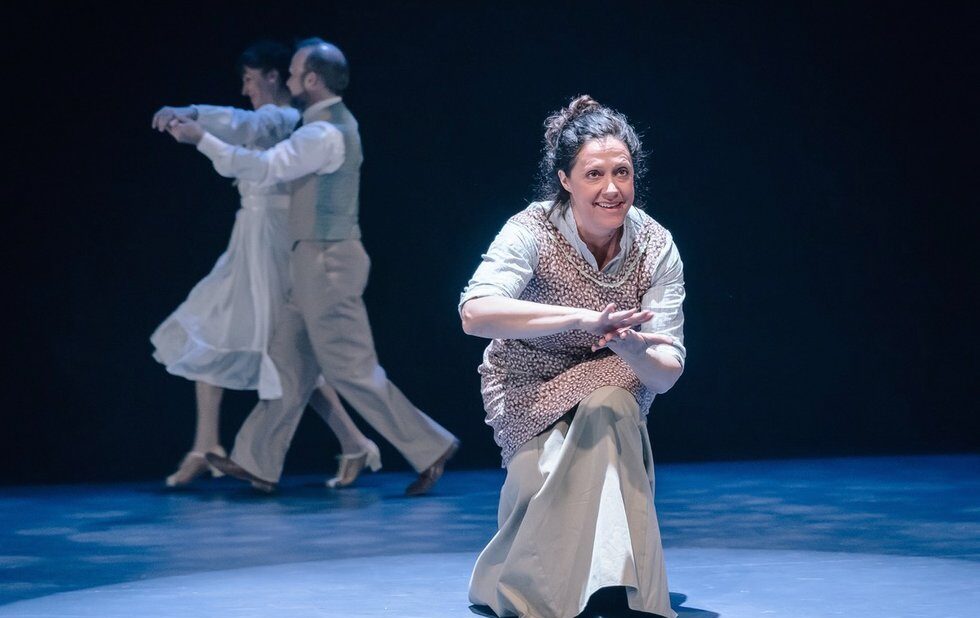 Sitting in Theatre Rusticles production of Thornton Wilders American classic Our Town, you dont just watch the citizens of Grovers Corners, New Hampshire. You become part of the town.

The central character in the script is the Stage Manager, who addresses us directly and guides us through the plays three acts. In Allyson McMackons fine production, the entire cast shares that role, making the narrators voice a wider, all-knowing source of information.

Wilders skill and the reason the show is a perennial favourite is taking the personal and particular about the characters and their relationships and by plays end making a universal statement about humankind.

The strong acting ensemble not only give a physical life to their characters but also become milk-cart and horse, doors and various other inanimate objects. Sometimes the performers are carried into a scene like mannequins who then come to life. Theres no real offstage (the simple set is a grey square painted on the floor) those not involved in a scene watch the action from the sidelines and sometimes echo the gestures of those performing.

Some characters are more sharply drawn here than usual, and several scenes stand out, including the confrontation between Gibbs (an angry, commanding Whynot, the role played darker than usual) and George (the wonderfully limber Finlan) the doctors irritated mood continues in an episode with his wife (Jenna-Lee Hyde). Taylors Emily is a vibrant, testy teen who calms down as she approaches marriage but again wants more freedom in the final scene. Taylor and Finlan give the Emily/George scenes a palpable emotional richness.

The shows success is bolstered by Baughs practical, solid Webb (he entertainingly fields questions from the audience) and his protective wife (Sarah Machin Gale, bringing an admirable physicality and gravitas to the role) Rusticle regulars Viv Moore and Lucy Rupert, who create memorable cameos with seemingly no effort Francois Macdonald as the town choirmaster and drunk and the energetic Augusto Bitter in several parts.

And though the design is intentionally spare as it is in the original script Michelle Ramsays circle-based lighting relies on pools of illumination that create households and other specific locations, while Brandon Kleimans costumes are understated in the first part but literally shine in the last.

That final act, set in the cemetery and with sound design by Paul Humphrey, is magical, both in terms of whats discussed and what we watch. The darkness of death and eternity figures into it, as does the starry sky above our planet. Its an unforgettable ending.