Shakespeare in High Park’s 70s take on the Bard’s comedy mostly works, but the musical numbers could be streamlined 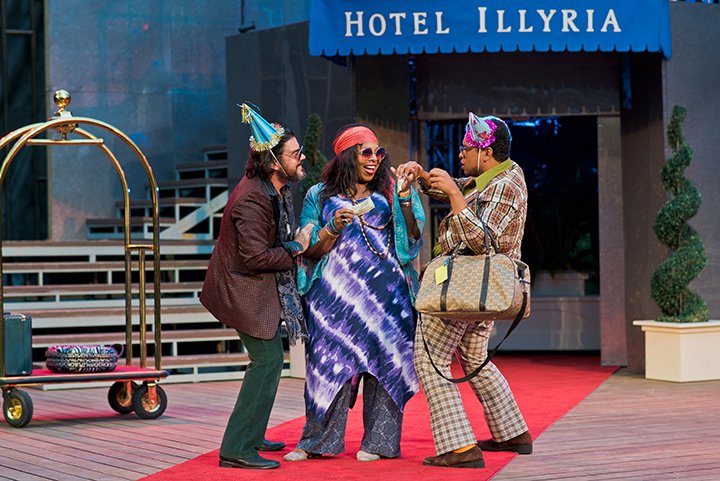 For the comedy instalment in this year’s Shakespeare in High Park, which runs in rep alongside tragedy King Lear, director Tanja Jacobs sets this tale about separated twins, mistaken identity and gender-swapping disguises inside a funky 1970s hotel, inhabited by disco-dancing knights and hippie fools decked out in tie-dye.

The action follows Viola (Amelia Sargisson) who, after surviving a shipwreck that separates her from her twin brother, Sebastian (Brett Dahl), decides to pose as a man named Cesario to land a job at the Hotel Illyria. Viola gets tasked with helping her well-to-do boss Orsino (Richard Lee) court a local countess named Olivia (Naomi Wright), but things get complicated when Olivia instead falls in love with Cesario, and even more so when twin brother Sebastian eventually turns up.

Overall, the hotel-as-kingdom conceit is an intriguing choice that jives reasonably well with the Bard’s script. Add in vibrant 70s costumes designed by Victoria Wallace, including crisp blue bellhop uniforms, disco shirts, big sunglasses and bad plaid pants, and the production takes on a kind of quirky, kitschy Wes Anderson feel, which could even have been taken further with the set and props.

Jacobs generates consistent laughs, maximizing the hotel humour in the various intersecting staff schemes and mix-ups, with Cadieux’s continuously-sauced Sir Toby standing out as the comic highlight. She also accentuates the queer attraction between Sebastian and his rescuer Antonio (Kristiaan Hansen), the hint of which has long been debated amongst Shakespeare scholars, and here results in a tender moment that resonates.

Sargisson is solid as Viola and Cesario, but the production finds an extra gear when Wayne-Phillips’s animated Maria takes centre stage to set the prank against Malvolio in motion.

The show works as a comic 70s-themed romp, but musical numbers at the beginning and end feel a bit clunky and out of place, and could be streamlined into more effective introductory and finale bookends.