NOW MagazineCultureTheatrePass Over is a blunt drama with subtle power

Pass Over is a blunt drama with subtle power 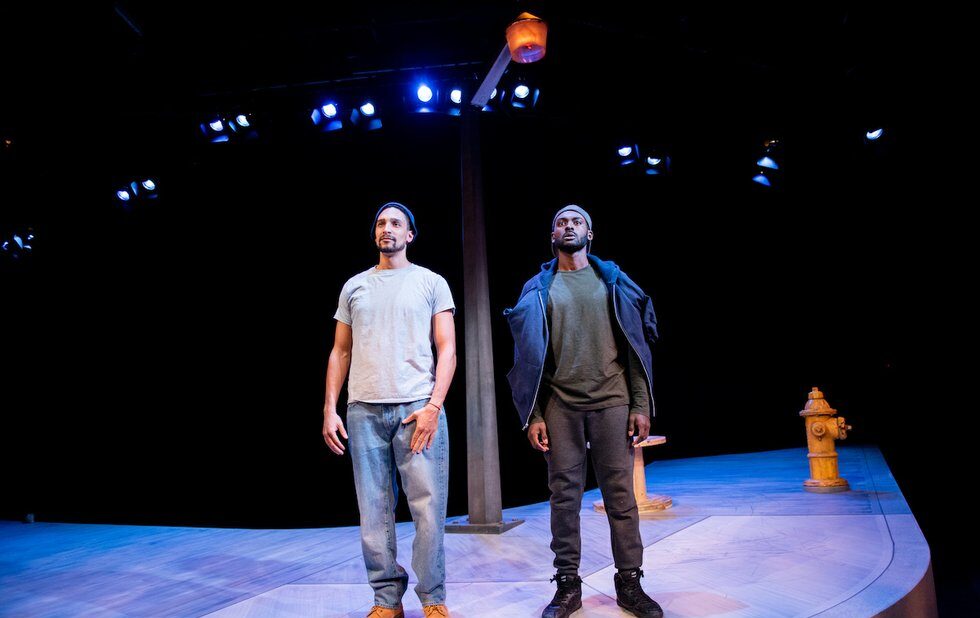 The timing of Obsidian Theatre’s production of Pass Over is apt. New York-based playwright Antoinette Nwandu’s Beckettian drama is obviously rooted in America’s recent political context, but its scathing view of apathy toward systemic racism is especially resonant in the wake of the status-quo contentedness on display in Canada’s federal election.

Inspired by Beckett’s Waiting For Godot, Pass Over opens with Black friends Moses (Kaleb Alexander) and Kitch (Mazin Elsadig) idling on a street corner. They joke around, play word games, physically spar and describe what the “promised land” looks like for them. They’re also paranoid from being harassed and surveilled by the police, and every now and then a floodlight startles them into frozen tableau, hands in the air.

Their aimless routine is interrupted by a tall, goofy-looking white man (Alex McCooeye) carrying a picnic basket. Wary of his naïf demeanor (he says “gosh” and “golly” a lot), they ask if he’s a cop or a Mormon. He insists he’s on his way to his mother’s house and, apparently lost, stops to rest his “weak arches” before unloading an endless supply of food from his picnic basket.

Turns out his name is Master and he’s utterly oblivious to racial tension. He complains that Moses and Kitch say the N-word too much and wonders why he can’t say it, too. Not long after he leaves, a police officer (also McCooeye) appears and roughs up the two men. The layers of his police uniform echo Master’s heavy-looking three-piece suit (costume design is by Vanessa Fischer), but he has zero problem throwing around the N-word.

Pass Over effectively uses absurdity, repetitiveness and minimalism to show its audience a Black point of view of whiteness and the exhaustion of having the same conversations and experiences over and over. Its satirical target isn’t so much police violence against Black people than the political apathy and soul-destroying capitalism that enables it. It’s no surprise filmmaker Spike Lee directed a version in Chicago (which he also filmed and released on streaming platforms).

Director Philip Akin – in his last show as Obsidian’s artistic director – manages to draw out the characters’ humanity without getting bogged down by the script’s heavy symbolism (Old Testament references come fast and furious). His spare staging and leisurely pacing (the show begins unassumingly before the house lights go down) contributes to a mood of vast ambivalence that Alexander’s and Elsadig’s playful performances riff on and subvert. It helps that Julia Kim’s exaggerated sloping sidewalk set makes Moses and Kitch seem miniature (as does McCooeye’s height).

At times, the show sometimes doesn’t find a balance between broad caricature and nuanced emotion. McCooeye has the trickiest role in that regard, but adds dimension to the doofus Master through vocal rhythms and ticks, a technique he flips to chilling effect as the cop.

Pass Over is smartly constructed and sustains a sense of anticipatory edginess to the end. It is blunt and confrontational, but it satisfies in the subtle ways it captures an overwhelming, complex and precise tension.