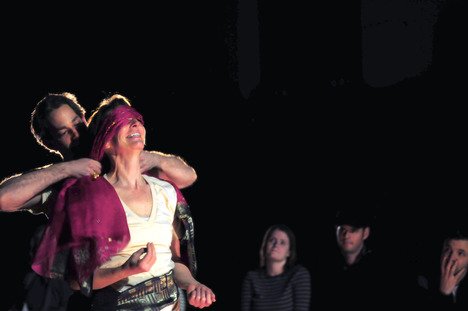 Adapted by the Dora-nominated creators of Gorey Story, this rendering of Henrik Ibsen’s epic romantic adventure takes plenty of intriguing risks, but the result is hit and miss.

The play is staged in various areas of the immense Church of the Holy Trinity. The audience awkwardly shuffles around, following the action from one end of the massive space to the other – mirroring, in a way, the sweeping travels of the protagonist.

While Ibsen wrote the play with a cast of over 40 characters, this production is a two-hander, with Susan Coyne as Peer and Matthew Romantini as about 39 other characters. Coyne is charming in the role of the restless, wanderlusting Peer, but Romantini struggles through head-spinning character changes that needlessly complicate the already complex narrative.

Also, with the action definitively set in the 19th century and care taken throughout to feature period props (love the neat wooden skis Romantini glides around on), it’s jarring when director Erika Batdorf and sound designer Richard Feren choose to blast Madonna during an otherwise traditional Norwegian wedding.

That said, lighting designer Jason Hand’s creative use of matches to briefly break total darkness makes the spooky scene between Peer and Romantini’s spot-on Troll Mountain King resonate in a way the rest of the play should.