Permanence is a sketchy affair 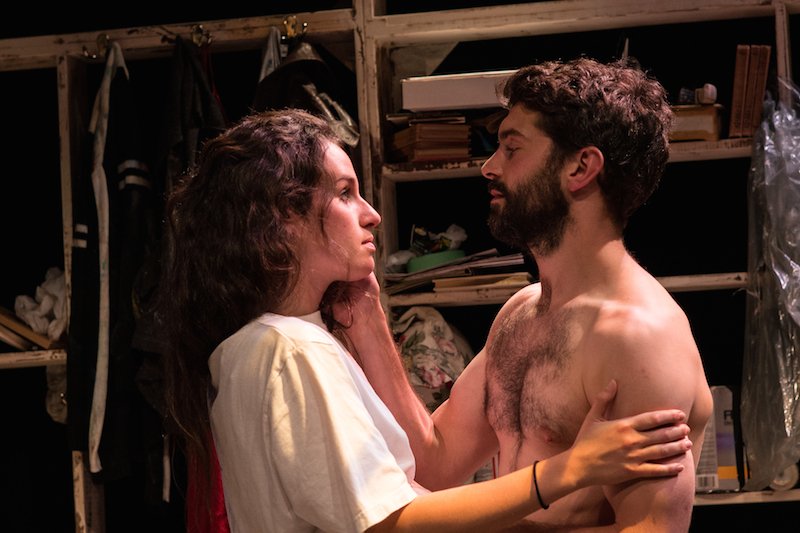 This tumultuous relationship two-hander from London-based playwright Cyd Casados explores the emotional space between sex and love, hedonism and partnership, through shifting power dynamics in a fiery affair.

Rebecca (Samantha Michelle) is a young doctor completing a residency at a large metropolitan hospital when she picks up Steve (Ludovic Hughes), a painter whose art career is just beginning to take off. They have sex in his small apartment/studio, and afterwards she reveals that she regularly sleeps with other people behind her partners back (I just love fucking, she remarks dryly).

They carry on this affair with knowledge of each others promiscuity increasingly becoming a way of needling each other, but with Steve seeming to be more on the side of enduring rather than enjoying the arrangement. Things appear ripe for change when Rebecca reveals shes left her partner, and moves in with Steve to become his assistant following an incident at the hospital, but even as their lives become emotionally and materially intertwined, the cat-and-mouse, refuse-to-commit emotional games continue.

Despite the unconventional relationship under examination, the play never really gets that interesting, and one of the most potent moments when Rebecca shows up unexpectedly after making a big mistake at the hospital isnt very well directed (by Hannah Price) or acted. The scene is played too quickly, Michelles tears and panic are not convincing, and her numb-to-the-world character isnt developed in a way to elicit much sympathy. Overall, its unclear why Steve is so enamoured with her, which undercuts much of the hand-wringing and agonizing at the heart of the show.

Promotional materials say the play is set in the late 1990s, and this is reinforced with choice blasts of radio hits during scene transitions including Nine Inch Nails, Smashing Pumpkins, Arrested Development and Madonna, but nothing in the main action save for the absence of smartphones takes advantage of this nostalgia, which is a bit of a head-scratcher and a big missed opportunity.

For this play to really work, the audience needs to connect more with Rebecca, in terms of motivation, backstory and, ultimately, likeability. Understanding whether she really is just chasing pleasure at every turn or rather fighting some inner demons would raise the stakes of what currently seems like an extended lovers quarrel.